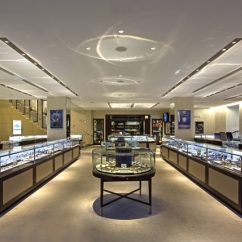 Glen Cove, NY--London Jewelers was featured in an article in Newsday for securing tax breaks and moving forward with its $2.7 Million plan to purchase a building that will both consolidate its multiple administrative locations to one and importantly keep its corporate headquarters on Long Island.

The jeweler, which has nine stores spanning Long Island, Manhattan, and New Jersey, will purchase a building in Glen Cove and consolidate its corporate operations into it from three different buildings now housing various departments. London Jewelers had applied for a tax break for the move, which will keep the back-office jobs in Nassau County instead of moving them to one of the other locations. The store did receive a tax break, albeit less of one than it had requested, says the paper.

"This is a back-office operation that could really be located any place. But the commitment to Long Island and Nassau County is strong with this company and with the IDA’s assistance we’d like to keep them here," [London’s real estate attorney Daniel P. Deegan] told IDA board members before they voted on the tax incentives.

In return, London will add eight people to its office and administrative staff of 46 within three years.”

CEO Mark Udell told Newsday the tax break will help the retailer to remain "viable in a region that we have called home for nearly a century." He and wife Candy are third-generation owners of the business.