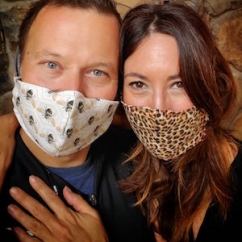 Denver, CO—With travel sidelined and retail shuttered, Manos Phoundoulakis—normally in charge of business development for Omi Gems—found himself with time on his hands. Clients didn’t want to talk to him because they were all closed too, and he and his wife, Kelle, had finished their various house projects. They were bored and looking for something to do.

That’s when his aunt mentioned that local nurses were already running short of masks, and suggested maybe they could make some and sell them.

Phoundoulakis went onto Facebook Marketplace and found an “ancient” Kenmore sewing machine (made in the 1960s, he says.) He and Kelle watched YouTube videos to learn how to operate it and how to make masks, then went to JoAnn Fabrics and bought some supplies and got started. They’d budgeted $200 and figured the project would keep them occupied for a couple of weeks. But before he knew it, he’d spent the entire $200 and people were clamoring for more. 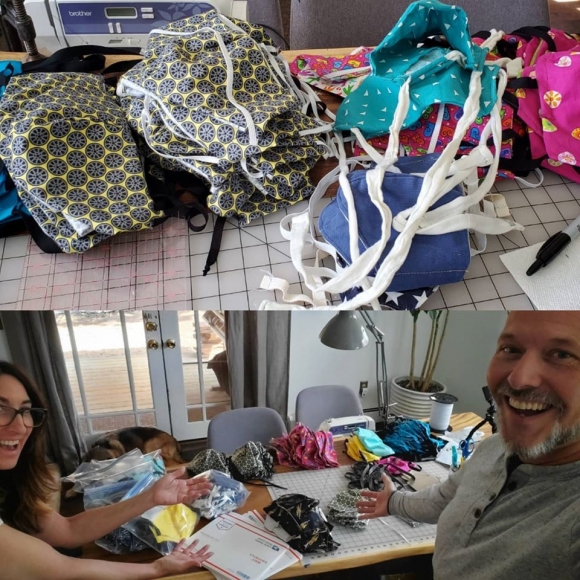 “Friends were saying I need five, 10. I have nurse friends saying ‘we need as many as you can produce!’ I was thinking to make 50 masks, but then realized how big a demand there was,” he says. Their entire dining room was given over to mask-making.

Soon Manos realized he and Kelle couldn’t keep buying supplies. “I’m commission only, she just launched a new jewelry brand, Gold And Smoke. We knew we’d find a way to use our talents and figure it out, but I don’t know how we can afford much more.”

That was when Rebecca Moskal, president of industry PR firm Communiqué suggested he crowdfund his efforts. Phoundoulakis debated whether to charge for the masks or go the crowdfunding route, but Moskal urged him to start a GoFundMe page, and said she’d be the first contributor.

His initial ask was $750 to buy more supplies—cotton fabric, twill tapes, and elastic—but within two days he’d raised $1500, including a $500 donation from one individual.

He and Kelle got sewing. But they also quickly realized that the two of them, both novices, couldn’t make that many masks that fast. Even two experienced sewers couldn’t make as many as were needed as fast as they were needed. So Manos and Kelle put out a call on social media though Kelle’s blog and asked for sewing volunteers. They posted the tutorials they’d used, and patterns to download.

Before long they were managing the Mask Makers’ Collective, a team of over 20 volunteers sewing at home. Gradually Manos morphed from mask maker to mask coordinator—packing, shipping, labeling, making sure that the right kind of masks got to the right places, and cheering on the team.

Since then, some of the volunteers have gone back to work or haven’t been able to continue, but at its peak, the volunteers together were turning out between 100 and 150 masks a day. Meanwhile, Ashley Brown, the former marketing director for Stuller who last year relocated to Denver and is friends with the Phoundoulakises, volunteered to be a courier. She’d been working for a local jeweler who like everyone else was closed, so she offered to drive supplies to volunteers, pick up finished masks, make post office runs, and so forth.

Other industry people stepped up too, once word got out.

“People are helping any way they can. The jewelry community is just magnificent. It’s been a godsend,” says Phoundoulakis. “Nan Palmer from Facets Jewelry Consulting helped with some systems to stay focused and coordinated.”

Groups far and wide have received masks from the collective. First responders and frontline workers are a priority, but not the only recipients.

“We’re making masks for the Navajo and Hopi nations because they’re very short on them. We’ve just sent masks through the FBI task force jewelry crimes division to first responders.”

Since the project began last month, Manos and Kelle have distributed over 2,000 masks made by their teams. Some team members will drop-ship directly to recipients (after Manos sends them a label) and others will ship them back to him and Kelle to be sent out from there.

Since Phoundoulakis’s first GoFundMe request, the project has raised over $10,000. Among the supporters is his company, Omi Gems, which is sponsoring FedEx labels, reserved for shipping masks quickly to frontline workers and first responders. But when Manos went to the FedEx office with a shipment, he saw the workers there weren’t wearing masks because they couldn’t find any.

“I’ll be back in a couple of hours,” he told them. He came back with eight masks for the four FedEx employees: two each, one to wear and one to wash. They’ve also given them to local doctor’s offices, home health care workers and many others.

“It’s crazy how many people don’t have them,” he said.

The project is still cash-positive, says Phoundoulakis, but money goes quickly. $9000 has already been used: $2,000 for shipping and $7,000 for finding materials—the sourcing of which has been a challenge. For instance, the only way Phoundoulakis could get more twill tape for binding was to buy a 7,500-yard roll at a cost of $2,000. That’s enough to make almost 6,000 masks. 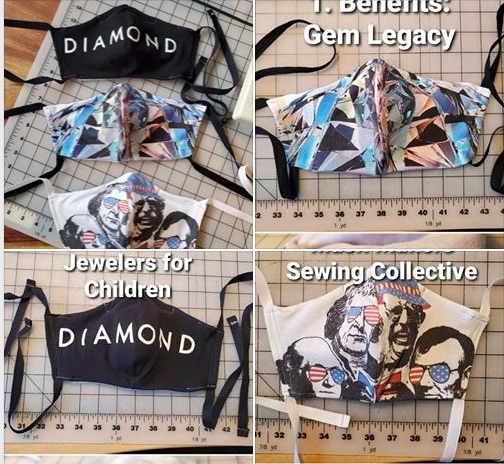 The shirt off his back. There are people in the world who literally give the shirt off their backs for a cause. AGS’s John Carter proved himself one of those. He sent three special T-shirts to Manos to use to make masks (above) and auction them among AGS members to raise money for charity. See the auction post here. Proceeds from one of the three masks were earmarked for Gem Legacy, another went to Jewelers For Children, and the third was put back into the Mask Makers Collective to make more.

Then Omi Gems principal Niveet Nagpal said he’d match whatever funds were raised in the auction. $380 was raised initially and he matched that, bringing the total from that fundraiser to over $700. Meanwhile, Manos felt badly about cutting up his friend’s favorite T-shirts, so with some of the extra fabric left over, he made a special party mask and gave it back to Carter. The whole thing was chronicled on social media, on AGS’s Facebook Group page.

That, of course, sparked a whole new idea. Manos next cut up his own favorite Ramones T-shirt (below) to make another party mask that will be auctioned off by AGS for JFC.

How much longer they’ll make masks depends on how much longer they’re needed and how business goes. In the week leading up to Mothers’ Day, Phoundoulakis was somewhat busy with his regular work. How much mask-making time he will have in the future of course will depend on how business goes. Luckily, he says, Omi had a very strong Centurion and Tucson, so he’s hoping that continues and that they can keep a team of volunteers making masks as long as they’re needed as well. 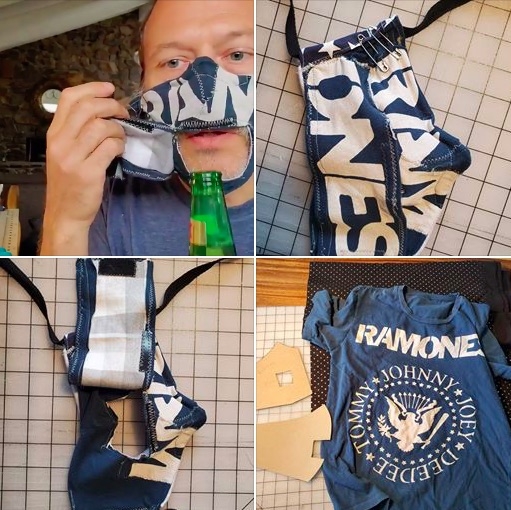 Previous article:
Love In The Time Of Corona