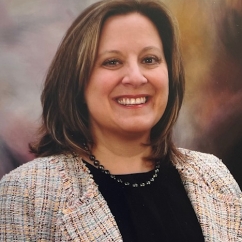 New York, NY--Mark Henry Jewelry has appointed Kristen Scheibel to the role of Vice President of Sales for its independent division. She will be heading up their growth initiatives and retail partnerships as the company expands its business with independent jewelers across the country.

Scheibel has nearly 20 years of experience in the fine jewelry industry, most recently with CTF North America (Hearts on Fire/Memoire) where she managed the business with select retailers throughout the Northeast and Mid-Atlantic regions.

Prior to joining CTF, she spent almost 10 years at the former Seattle based Simon Golub & Sons, where she held various roles including National Sales Manager.

Mark Henry is a fine jewelry and high jewelry house with an unparalleled focus on spectacular gemstones. Founded in 2004 in New York City, its founder, Mois Medine, is a pioneer of bringing natural Brazilian Alexandrite to the US. The company's offering has expanded into other rare, exotic, and fine gems in recent years. Led by Mois Medine and his two sons, Henry and Haim, Mark Henry says it is positioned for substantial growth in the American independent retailer channel.