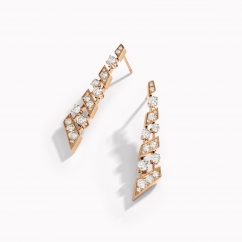 “Fifth Avenue is synonymous with luxury and fashion,” says Maral Artinian, founder and CEO of Marli New York. “There’s this elegance, but also an air of mystery and excitement — it is a street that is constantly moving and evolving. I wanted to create a line of jewelry that captures all of what makes Fifth Avenue special.”

Featured in the Fifth Avenue line is a selection of drop earrings, a choker necklace and bracelet further complement, and a cocktail ring. All are designed to be worn with other Marli jewels.

The Avenues campaign, modeled by Josephine Skriver, celebrates the idea of freedom and infinite possibilities, Skriver embraces round-the-clock shine through the diamonds and designs of the Marli New York creations.

The jewels in the Avenues collection are designed to be worn anytime and anywhere, as stand-alone pieces or as mix and match sets. It encapsulates Marli New York’s concept of “timeless presence,” with their cutting-edge geometries and precious sparkle.