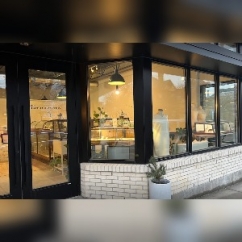 Grand Rapids, MI--The Dime and Regal jewelry shop is to reopen on the weekend after being forced to relocate due to a spring fire.

[Image via Dime and Regal]

"As most of the community knows, there was an unfortunate fire at Tatum Bookbinding," said co-owner Samantha McIntosh in a news report. "The fire itself did not damage us but the demolition of the building did."

Authorities are investigating the fire incident as arson, but the police seem to have exhausted their leads. The jewelry store's co-owner, Courtney Jones, offered a temporary solution by sharing the space at her candle company down the street.

The candle company split its retail space to accommodate both businesses for seven months.

"We didn't have a lot of time to adjust even," McIntosh noted in the report. "The fire department was telling us get in, get your stuff and get out as soon as possible before this building collapses."

While sharing the space has helped the businesses survive, it has negatively influenced their sales — with numbers going down around 20%.

But it all worked out in the end, and the store reopened on October 22. The first 12 customers received goodie bags and champagne — a way of thanking the community for their loyalty while the shop was away.