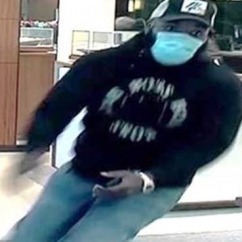 Wilmington, NC—A black male suspected of conducting a grab-and-run theft on December 13 may also be the same perpetrator of two earlier similar thefts. The suspect (image) most recently entered a retail jewelry store at 3:06 p.m. and asked to see high-end gold watches. He was shown two watches. He then put one on and used Face Time to show it to someone via phone, before running out the door.

Jewelers’ Security Alliance reports the suspect was in the store less than five minutes, during which he was talking or using his phone, and was careful not to touch the showcase glass or the glass door as he entered and exited. He escaped in a dark Mitsubishi Outlander or similar vehicle.

The suspect is believed to have committed similar grab-and-runs on 11/28/20 in Gastonia, NC (a rope chain necklace) and Hanover, MD (another high-end watch) on 08/29/20. He is described as 6’ to 6’2”, about 230 lbs. with a thick build, tattoos on the top of both hands, and wearing New Balance sneakers. A clearer image is shown below.

Next article:
Merry Christmas From Centurion To You!