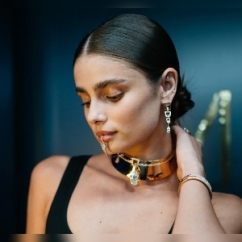 Only Natural Diamonds sat down with the founder and creative director in a suite in the Paris Kimpton hotel just hours before the big event and shared insight into creating the collection for Messika, producing the Paris Fashion Week event and what she hoped guests would experience.

“I aim to continue to make high jewelry more desirable,” she says, pausing to confirm her word choice in English, “because when I launched my brand, I wanted to make diamond jewelry feminine, sexy and something that leaves an empowered feeling, something I felt sacrificed in traditional jewelry.” Her runway experiences intend to show that fine jewelry is also fashion, something to be worn daily, like a favorite jacket or pants.

This latest installment of the high jewelry collection, “Beyond the Light,” is higher in value with bigger diamonds than the one shown on the runway last year. Still, the designer avoids the trope of pricey dramatic jewelry that doesn’t leave the safe. “I want to shorten the distance between the design and the ability to wear it,” she explained. 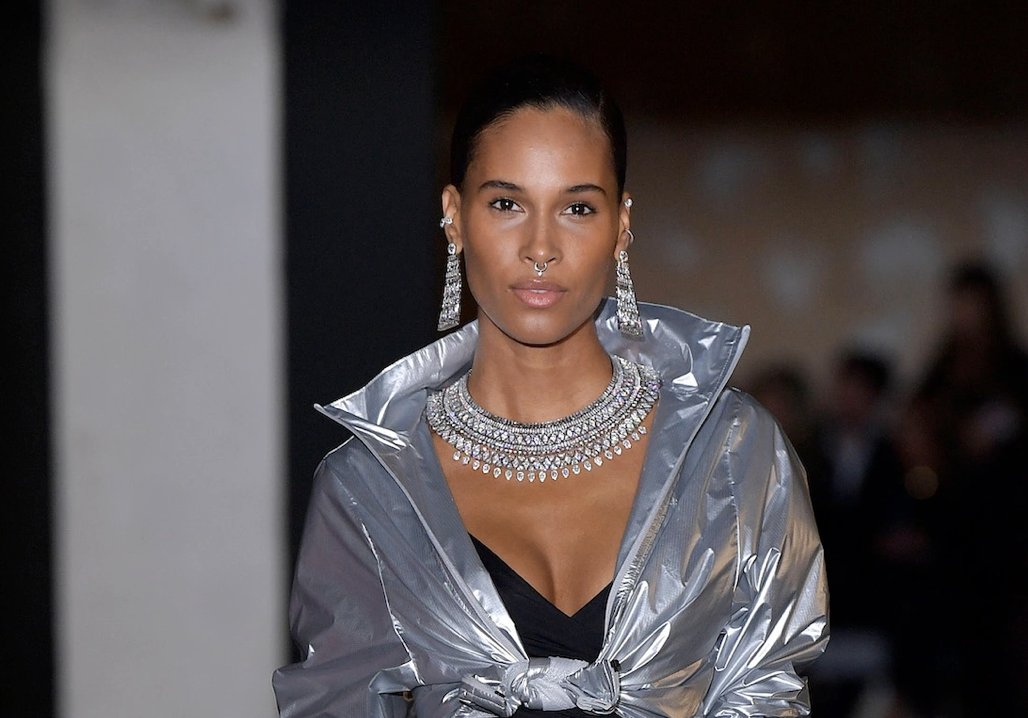 To that end, she demonstrated how easy it is to wear diamonds daily by pairing the high jewelry pieces with 29 Adidas sportswear looks. Out came models such as Taylor Hill, Toni Garrn and Cindy Bruna in cheeky shorts, swimwear paired with white shirts tied at the waist and crop tops worn with track pants, styled by Geraldine Saglio, formerly an Editor-at-Large for VOGUE Paris.

“I took a risk to keep moving forward with an unexpected style of clothes to make a different proposition of wearing diamonds,” she said. It was a way of interpreting ancient culture as if it existed today but not literally. “This period of history was modern like today’s society. Women were equal to men; they could get divorced and obtain property and jobs. They embodied power and strength as we see in Cleopatra,” she continued, drawing a parallel between women’s voices in society.

These modern Egyptians avoided clichés such as kohl-lined eyes walking among pyramids hands a jut. Instead, Messika chose a raw, industrial-looking space devoid of gilding, tapestries and marble as another way of disrupting fine jewelry standards.

The 150 pieces shown during the spectacle—which required 45 guards backstage—included sizable breastplates, mouth jewelry and pieces that move and transform, sharing similarities with Egyptian adornments. For instance, colossal collar necklaces in gold, which according to the jeweler, signified spirituality and were worn when buried. Certainly not Egyptian, Messika recruited a fashion queen to walk the runway in the pièce de resistance, the Akh-Ba-Ka necklace worn by Naomi Campbell. She regally carried the winged-motif natural diamond necklace containing 2,550 gemstones, of which the primary diamonds were cut from the same 110 carat natural rough diamond. In total, the necklace is 71.49 carats. The one-of-a-kind piece demonstrates the quality and expertise in natural stones clients seek from the Parisian jewelry house. 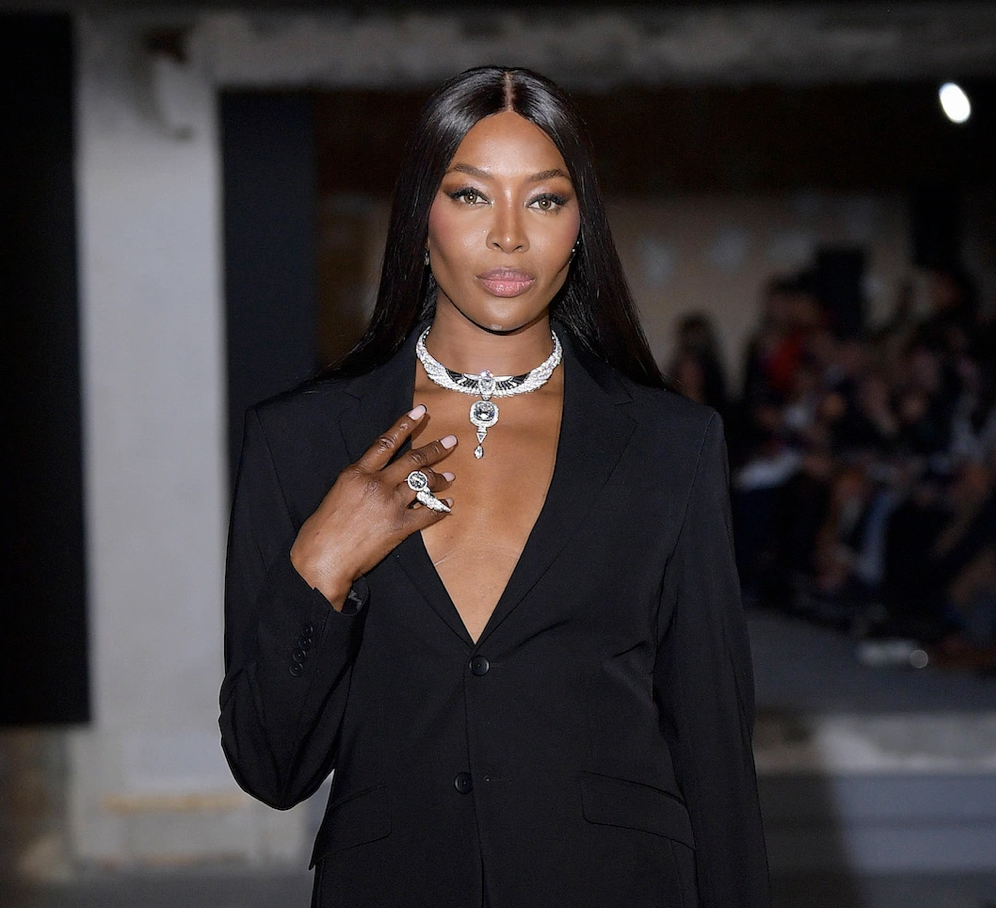 Another special guest was a male model Alton Mason who walked the runway. “I couldn’t have a Cleopatra without a Pharaoh. There is a huge men’s jewelry trend that will be even bigger next year. I want to show I will have a voice in this arena,” said Messika. The men in her life already pioneered these looks; her father, husband and brother all wear diamond Messika bracelets in various combos.

The front row guests, including Gigi Hadid, who formerly fronted a Messika campaign, Emily Ratajkowski, Carla Bruni, Elsa Hosk, Derek Blasberg, and Nina Dobrev, among others, enjoyed seeing the jewelry up close on the models as well as the large screen which projected close-ups of the jewelry simultaneously. The politics of fashion show seating was one thing the creative director said she learned from the first show. “This year, we are approaching it more like a military operation with more people to assist.”

The show was undoubtedly unexpected to Dobrev—on a quick break from an undisclosed acting project in New York to attend the event—, who spoke to Only Natural Diamonds at the post-show cocktail event.

“It felt fresh, innovative, different, and unique. I loved the juxtaposition of the athleisure of the clothes with the high jewelry. I had never seen this before, and I appreciated the fresh take on wearing jewelry,” she shared, adding, “It’s how I see Messika jewelry in many ways. For example, diamonds are classic, but she finds a way to make them edgy, cool and useful.” 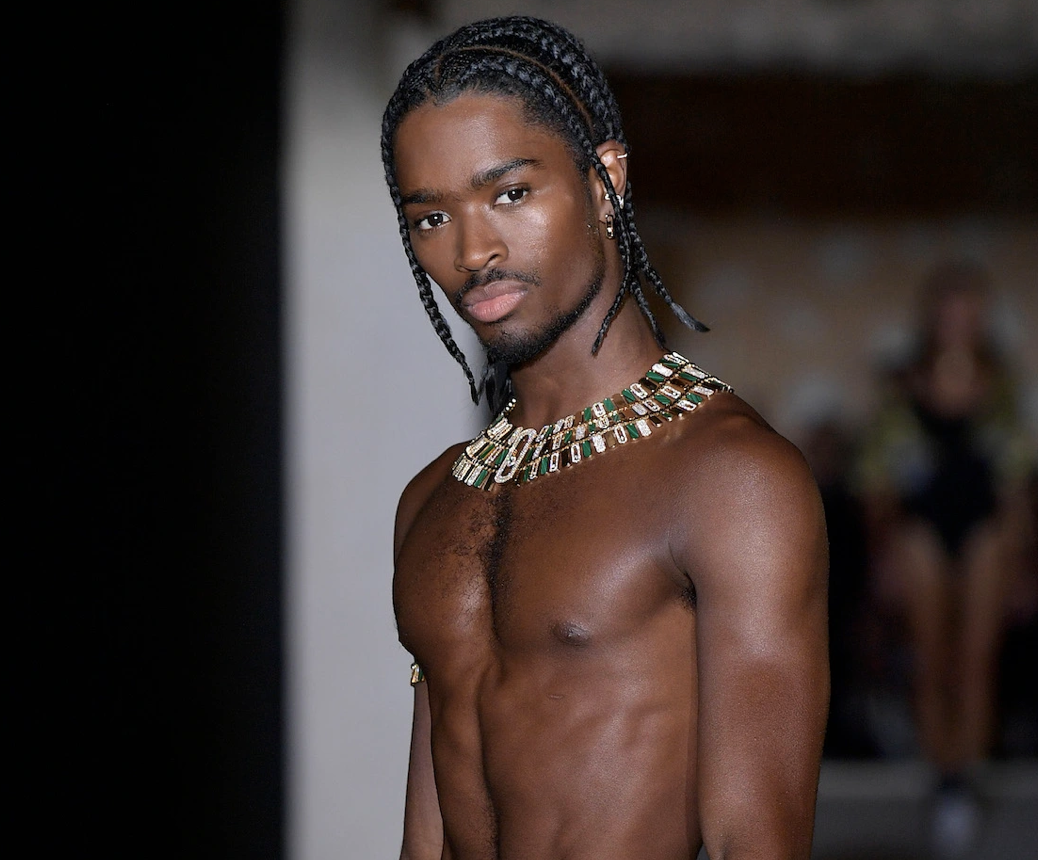 And where does Dobrev wear natural diamonds? “To the gym, obviously,” she joked. “Seriously though, I wear smaller diamonds day-to-day, but statement diamonds feel more momentous to wear to dressed-up occasions like tonight,” she added, pointing out the pear-shaped diamond necklace with a claw-like reverse setting from Messika she was wearing.

Earlier in the day, Messika had revealed how she overcame her pre-show jitters. “I’m not a confident person,” she admitted, adding, “I was concerned until a few days ago how the jewelry and clothes were going to match. But then I said if one brand could afford to go in this tricky direction, it’s Messika.” She explained how after doing the fittings the day before, she saw it all come together. “I had a nightcap with my father, and I told him, ‘We are in our shoes as a brand; I am confident where we are.'”

Messika looked pleased and confident at the after-party as she posed for photos with guests and danced to the sounds of Diplo decked out in head-to-toe Alaïa. Her only wish for anything different? “I wish I could transport everyone to Egypt and have a show under the stars outdoors at night, near the Sphinx.”

This article was first published on Natural Diamonds and has been republished with permission.

Next article:
How To Leverage Social Media To Boost Holiday Sales