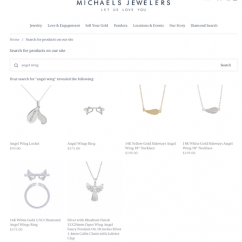 Danbury, CT—Michaels Jewelers, a longtime AGS jeweler with nine stores in Connecticut, has launched a special collection of jewelry to benefit Connecticut Children’s health system, the only one in the state dedicated exclusively to the care of children. The jeweler’s new “Angel Wing Collection” (image) will be available in both 14k gold and sterling silver. 25% of proceeds from the collection will benefit the system, according to an article in Hamlet Hub.

Michaels Jewelers was founded as a wholesale business by Abraham L. Michaels in 1885 in Halifax, Nova Scotia. In 1905, his son Irving moved the family and business to New York City, opening its first retail jewelry store in 1911. The first Connecticut store was opened in 1915 in New Haven as Michaels Maurer and, after buying out Maurer’s interest soon after, opened multiple stores in Connecticut and New England over the years, eventually coming to the present nine Michaels doors, along with 11 Pandora franchise stores.

In 2019, Mark Michaels, the fifth-generation of the family to run the company, sold all nine Michaels stores to Camile Hannoush, owner of Springfield, MA-based Hannoush Jewelers. Hannoush pledged to continue both the legacy of the Michaels brand and its membership in the American Gem Society. Michaels, meanwhile, retained and is running the 11 Pandora stores.

Next article:
The End Of An Era: Australia’s Argyle Mine Ceases Operations