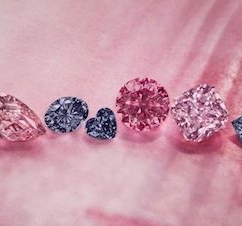 Kimberley Region, Australia—Diamonds may be forever, but diamond mines aren’t. On Tuesday, Australia’s Argyle mine brought forth its final batch of diamonds from the earth, ending an era that completely revolutionized the diamond and jewelry industry. It was an emotional time for employees, who came together in a ceremony marking the mine’s final day of operation. Image: The hero stones from Argyle's 2021 Pink Tender.

Since Argyle began production in the early 1980s, its 865 million carats of rough diamonds—not counting its rare pinks and deep cognac fancy colors—gave rise to an entire cutting industry in India, made diamond jewelry attainable to American mass market consumers, and sparked the end of the global monopoly De Beers had on the trade.

Argyle’s success is largely due to technology, both in the miner developing highly cost-effective ways to find the large diamond deposits, and in partnering with India to produce the jewelry-store equivalent of the Ford Model T. The lion’s share of Argyle’s production was the lower-end goods that at one time would have been discarded as too costly to cut into something salable. But with new technologies and thousands of cutters in India willing to work for a fraction of what their counterparts in Antwerp, Israel, or New York earned, suddenly those stones could be cut and set into jewelry and still turn a profit. While high-end retailers sneered at the $199 “frozen spit” tennis bracelet and other pieces like it, it made diamond jewelry attainable to a vast population of consumers who might otherwise never set foot in a fine jewelry store.

Argyle also put the first huge crack in De Beers’ monopoly wall. For its first 13 years, Argyle did sell its output through De Beers’ Central Selling Organisation, but in 1996, after the two sides failed to come to an agreement, Argyle dropped a bombshell: we’re outta here. Argyle’s decision to sell its own production was the beginning of the end of De Beers as cartel.

Argyle of course had something to offer the luxury market, too. Among the low-end production were some of the world’s most spectacular pink, red, and purple diamonds; colors so rare and valuable that the stones sold at its famous annual tenders have appreciated some 500%, outperforming all global equity markets. The mine also produced deep intense cognac-brown diamonds, along with many light browns it tried, largely unsuccessfully, to market as champagne. (It was so unsuccessful that when a champagne diamond got a cameo appearance in the movie Beautiful Girls, it was not for a good reason. “It’s BROWN!” said Martha Plimpton’s character, throwing the ring back at her rejected would-be fiancé.) It should be noted, however, that in more recent years, talented jewelry designers have been using champagne diamonds successfully in innovative ways, but they never took hold as the kind of mass-market item Argyle had envisioned.

Although the mine’s last day of production was Tuesday, closing a mine takes a long time. It will be about five years before it’s fully dismantled and the land rehabilitated and restored and turned over to the region’s indigenous people, said Argyle general manager Andrew Wilson. Argyle’s owner, Rio Tinto, has had good relationships with indigenous people in the region, and has a mining agreement that will return native title rights once operations are completed.

The mine has been a huge draw for tourists to the area. Indigenous-owned tourism companies hope that tours will still be allowed during the mine’s closing period—although of course the global pandemic is impacting tourism too.