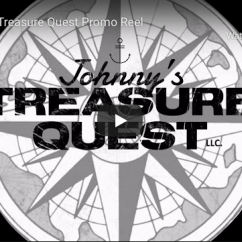 Washington Township, MI—“Don’t give away the store” is an admonition that means don’t undervalue your wares or services, but giving away the store is exactly what Michigan jeweler Johnny Perri is doing. As The Centurion reported in July, while most jewelers who decide to close their store typically either hold a going-out-of-business sale or melt down their inventory to recover its scrap value and sell off the gemstones, Perri is literally giving away everything in the store—if you can find it.

Perri and his wife, Amy, own J&M Jewelers in Washington Township, a suburb of Detroit. Perri is a second-generation jeweler, having inherited the business from his late father, who taught him the trade. But as the coronavirus pandemic took its toll on business, the Perris decided it was time to hang up their loupes. Inspired by Forrest Fenn's Rocky Mountain treasure hunt, the Perris decided to turn their store closing into a treasure hunt as well. Now they've added a new element that has sweetened the pot, so to speak: a special quest with a $100,000 prize, vs. the rest of the prizes worth approximately $4,000 each. The new, Willy Wonka-like quest will be open to only 10 people who find a silver ticket inside a specially-created chocolate bar.

Johnny Perri took all the merchandise that normally would have been in the store’s showcases, along with the contents of their safe—roughly one million dollars’ worth of silver, gold, coins, diamonds, and old merchandise—and buried it all over Michigan. As in, he and Amy took walks, hikes, and even kayaks, along with shovels, and literally buried merchandise in multiple locations, turning the entire affair into a gigantic treasure hunt that started last summer. Even better, Johnny’s Treasure Quest is about as COVID-safe as any activity can be, as the entire quest is outdoors and contest rules specify that teams must be made up of only one family or household. To date, there have been 12 quests in nine counties. The first quest launched August 1, and the final quest of 2020 launched October 31. 16 quests are planned for 2021, starting in early April and ending in late October. 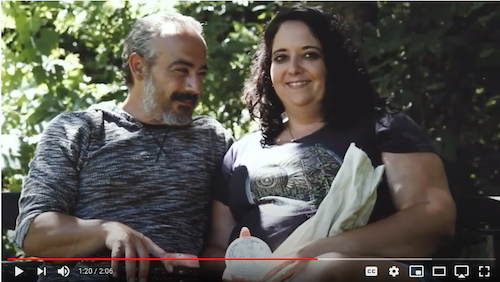 Johnny and Amy Perri buried merchandise from the store all over Michigan.

To participate, consumers go online to register and purchase tickets for $49, join the Johnny’s Treasure Quest Facebook group, and receive clues to find a cache, each worth roughly $4,000. Rules are specific: all spots to dig are clearly marked so that no damage is done to the surrounding area, sharing of clues outside each team is prohibited, and each treasure has a GPS tracking device in it.

Most of the locations Perri chose to bury merchandise have significant memories for him, reports WXYZ-7 TV, the Detroit ABC affiliate that did a feature story on Johnny’s Treasure Hunt. Indeed, the point of the hunt is to create memories, he says.

“Life’s made of memories. That was our slogan in the store,” he told WXYZ-7 reporter Jenn Schanz. Perri also feels that while his late father might have thought he’s crazy to be giving everything away like this, the elder Perri was a great giver and would approve of his son’s motivation: to create something positive and good out of the stress and pain of the COVID-19 pandemic and remind people never to give up hope. Click here or on the image below to watch. 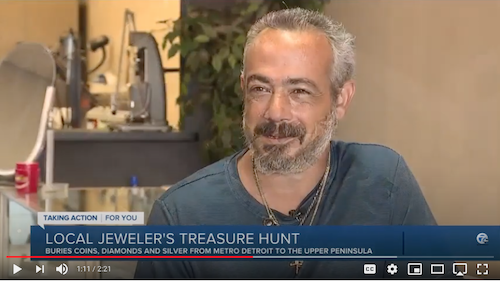 The promotion was picked up by both national and international media, with stories on ABC News, in Forbes, and the UK’s Trading and Investment Newsand more. In the meantime, Johnny’s Treasure Quest now has its own website, including logo merchandise and gift cards.

But now, in addition to the 16 quests planned for 2021, Perri is going a big step further. Inspired by the movie Willy Wonka and the Chocolate Factory, he ordered 400,000 logo-stamped chocolate bars from a local gourmet candy maker in Romeo, MI. 10 of those bars will contain a special silver ticket, which gives the winner and one guest admission to a weeklong adventure quest on the Upper Peninsula of Michigan, to find a treasure chest containing approximately $100,000 of merchandise. Ticket holders will be flown to the area next summer, housed and dined, and given clues and tools to hunt for the treasure chest. 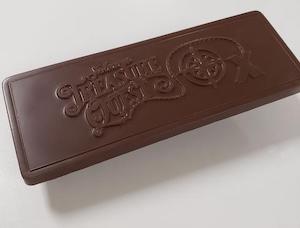 Chocolate bars are $10 each and available on johnnystreasurequest.com. Local pickup is slated to begin this week but anyone can order the chocolate bars by mail. 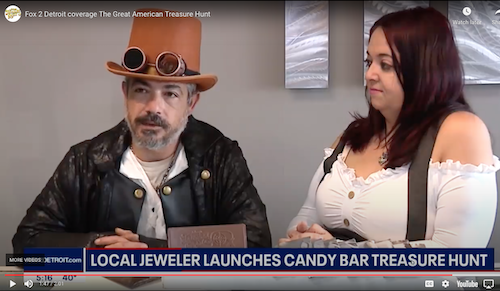