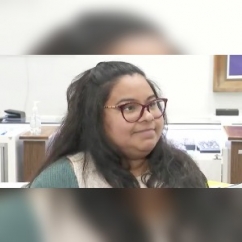 Montclair, CA--A smash-and-grab robbery at a jewelry store in Montclair Place Mall on Thursday, August 25, ended up in an exchange of flying items after store employees took offense to the intruders.

According to a local news report, the incident took place just after 6 pm at Anthony and Co Jewelers. Three men armed with sledgehammers entered the store and began smashing cases and taking items.

"All of a sudden I heard three loud booms and I thought it was a gun," Eduardo Haro, the counter attendant, said in the report. "I ran forward and there were three Black gentlemen. They were pounding the cases with these heavy sledge hammers. It was frightening."

His companion, Griselda Martinez, thought it was not a time to play submissive. "I was upset, of course, I was angry," she said in the report. "It just kicked in. I just started grabbing everything and decided, you know what, no, I'm going to fight back."

The incident's surveillance video shows items being tossed at the thieves. "I was just grabbing anything I could and throw it. I felt like they were going to come in more and at that point, I needed to defend myself," she said in the report.

Haro said he thought that the whole thing was "a little crazy."

They threw an object back at me, I got hit in the nose, but hey, that's life," Haro said in the report.

The plan worked, and the thieves took off, but not before leaving with expensive chains and diamond pendants.

"I guess my message is stop stealing man, we all have to work," Martinez said in the report.

Nobody was reported seriously injured in the incident.

Read more and watch the video in the original news report.