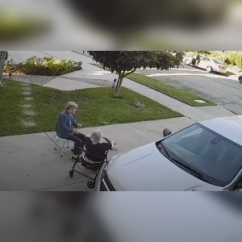 Glendale, CA--A series of distraction thefts have targeted elderly people in the Los Angeles and Glendale area in the past three months.

According to a local news report, a police flier unveils over a dozen distraction theft incidents. Most incidents follow a pattern where the suspect drives up to the elderly victims and chats with them, often outdoors.

The suspect interacts with their victims, showing them fake jewelry, hugging them, or even bringing along children who provide further distraction. In many of these cases, the prime suspects are known to be women, sometimes accompanied by children.

"Walk in groups, don't wear jewelry on walks/keep it hidden under your clothing, & pay attention to your surroundings; look for vehicles and people who may be following you or seem out of place," warned the Glendale police, per the report.

Check out this video below where two women drive up and talk to elderly women on a driveway in one of such distraction theft cases.

Link to the original report.