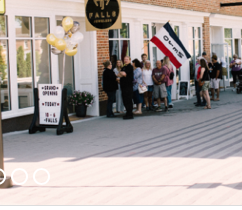 Kannapolis, NC—After the 2008-2010 recession, downtown Kannapolis, NC looked like a ghost town. Falls Jewelers was one of only three businesses left, and third-generation jeweler Sam Falls wasn’t surprised when his bookkeeper bluntly said the store needed to move if it was to survive. Falls relocated to a nearby shopping center where it has thrived ever since.

Now, as downtowns are revitalizing across the country, Falls Jewelers is back. In the case of Kannapolis, it’s because of the brand-new Atrium Health ballpark downtown. Top image: Grand-opening day at the new downtown store.

In this article in the Salisbury Post, Falls detailed how it was time to go home, as it were. He, his wife, and his two sons—the fourth generation of Falls Jewelers—opened a second store back downtown, just a few steps from Sam’s original shop that opened in 1990.

Since 1982, Sam Falls has followed his dream of having a full-service jewelry store in downtown Kannapolis. His father, Don, and grandfather, Herbert, were jewelers in Kannapolis, which led Sam to develop his passion for the jewelry industry at a young age. In 1990, after eight years of extensive training in jewelry repair and custom design, Sam and Jane Falls opened the doors of Falls Jewelers. But after 20 years downtown, their bookkeeper’s ominous warning led the couple to relocate to the Afton Ridge shopping center.

In the ensuing years, Falls jewelers has added an expert bench jeweler, additional sales experts, and the fourth generation of Falls to become jewelers. In 2014, Sam and Jane's oldest son, Spencer, began working part-time while earning his business management degree from UNC Charlotte, becoming full-time after graduating in 2015. He is the store’s inventory manager and also is a sales associate.

In 2017, Sam and Jane's youngest son, Caleb, also joined the Falls Jewelers staff as a full-time employee. With a degree in advertising and marketing from UNC Chapel Hill, he is now the social media and marketing manager and a sales associate.

It was the fourth generation that brought up the idea of going back downtown. From the article:

“For me, I just saw all the potential that was coming back here,” Caleb said. “It really bothered me to even have the thought that another jeweler went back to Kannapolis who wasn’t us. For Spencer and I being the fourth generation, also the thought that there’s been three generations before us that have been in Kannapolis, the fourth needs to do the same.”

It turned out to be a good move, because even though the two stores are relatively close, some customers find it more convenient to go to one or the other. And customers were lined up around the block for the store’s grand opening, says the article. 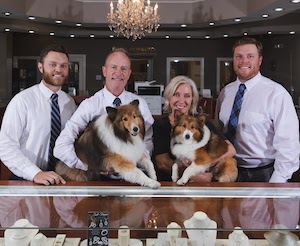 Next article:
More Evidence Mounts For Rocketing Diamond Sales, And So Far Travel Isn’t Hurting It