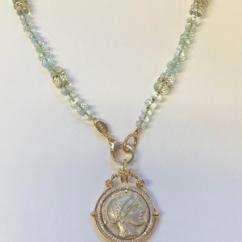 New York, NY—The Athenian Owl Silver Tetradrachm, a 21-mm coin dated from Attica, Athens (Greece) circa 440-404 BC is considered the most popular and recognized ancient coin.

According to mythology, an owl sat on the blindside of Athena the Goddess of Wisdom and Strategy, so that she could see the whole truth. In ancient Greece, the owl was a symbol of a higher wisdom and a guardian of the Acropolis. It represented about a week’s pay for ancient Greek soldiers. It also is said that President Teddy Roosevelt carried an Athenian Owl for good luck, and it inspired him to redesign American coinage.

Designer Michael Bondanza offers this new necklace featuring the Athenian Owl, accented with over 0.50 ctw pavé diamonds and 178 cts of faceted Aquamarine. The face up Athena flips to the OwlL. The necklace with gold roundels may be worn with the Aqua beads alone. The coin certified dates 440-404 BC.

The Michael Bondanza Collection can be see at The Centurion Jewelry Show, Salon M-105 or for further information, email geribwolf@mac.com.