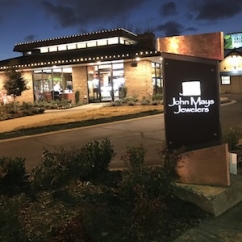 Ft. Smith, AR—After 18 years in a strip center and six years of negotiations to purchase a former bank building on a busy corner, jeweler John Mays got his wish. A nearly triple increase in holiday business in his brand-new freestanding flagship store was more than satisfactory validation for the jeweler’s longtime efforts to score the high-traffic corner location that sees more than 40,000 cars pass by each day.

“We didn’t move because we weren’t successful [in the strip center]. We moved because I thought we should be freestanding,” says Mays. “I tried to buy the building for six years but the owner and I could never agree on price." Finally, it was empty long enough and the two were able to agree and Mays bought the property, he says.

The building, originally a branch of Superior Federal bank, and later a doctor’s office, features many classic elements of architecture—such as timber and dental moulding—characteristic of Frank Lloyd Wright. In the remodel, the Mays family kept those elements, augmenting them with elegant finishes such as granite for the floors and fireplace surround, and gold wallpaper on the ceiling. The building’s walnut wood walls also were saved, but Mays had an artist stain and glaze them to a more modern finish. 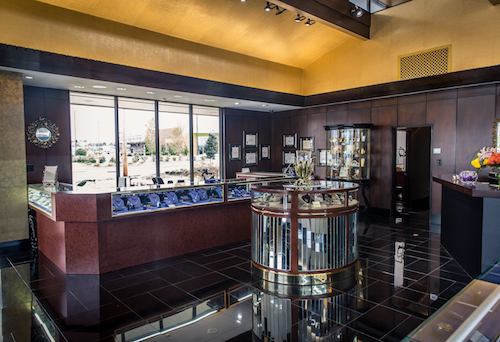 John Mays Jewelers' interior. Formerly a bank and later a doctor's office, the building had many architectural details worth saving, such as the walnut wood walls, seen here at the back of the store. Mays added granite flooring, huge windows, and gold wallpaper to the vaulted ceiling.

The building had brick walls with small windows, and Mays added floor-to-ceiling windows, increased the door to eight feet, and moved it from five feet into the building to being flush with the edge, adding valuable showroom space. The center of the showroom is 16-1/2 feet high with windows edging the tray ceiling. 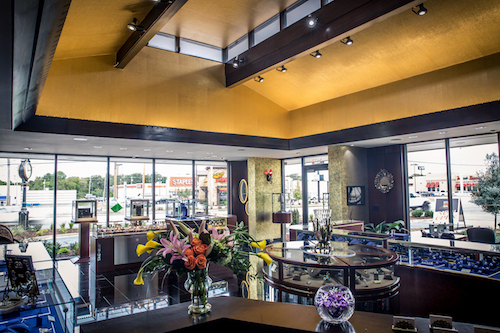 Top, the vertical skylight windows let in light without the risk of leaks that traditional horizontal skylights have. Below, the dental moulding beneath the vaulted ceiling is a Frank Lloyd Wright influence. 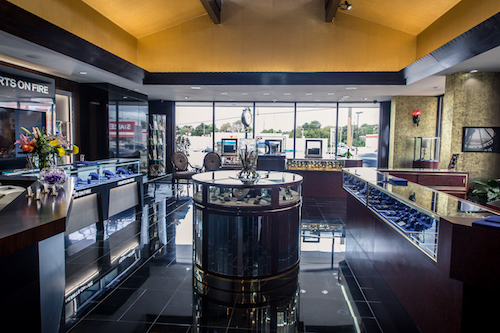 “I did a lot of research on lighting before I put it in,” Mays told The Centurion. The new lights draw very little electricity and give off very little heat, a significant departure from the traditional jewelry store halogen lights. Additionally, Mays invested significantly into the building’s infrastructure, such as a new roof and closing off what had formerly been the bank’s drive-through area. Parking for 40 cars completes the package, along with the jeweler’s special clock that had been at the old store and now stands guard outside the new. 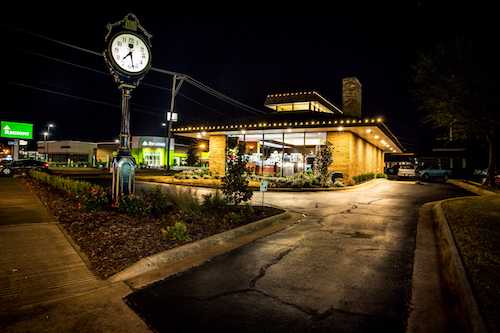 “I can just walk away and the boys (sons John and Kevin, both GG’s and bench jewelers in the business) won’t have to do anything to it for 25 years,” says Mays. 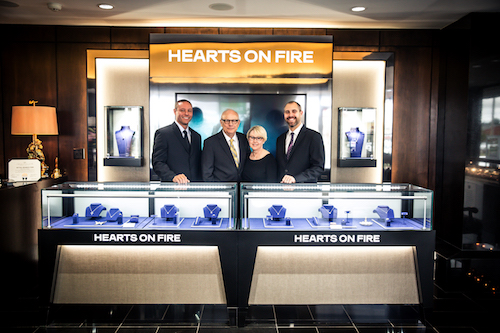