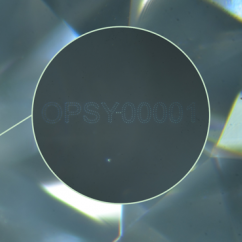 London, UK--Diamond security specialist Opsydia has unveiled new classifications for its sub-surface identifiers, allowing diamond manufacturers, brands, and grading houses to choose from a range of visibilities to suit their specific requirements.

Using the laser technology within the Opsydia System, users can choose from Nano ID features or Loupe ID features to create a permanent physical link between a specific stone and its grading report, blockchain record or branded jewellery origins.

Nano ID features do not affect the clarity grade of diamonds, even for flawless stones, and are not detectable with a standard grading microscope. Nano ID features can be placed up to 0.18 millimetres (180 microns) beneath the surface of a stone and must be read at >100x magnification or with an Opsydia ID viewer – a device capable of reading identifiers that is currently in the development phase.

The assertion that Nano ID (below) features have no impact on the clarity grade of internally flawless diamonds has been independently verified and confirmed by two leading grading houses, including the Swiss Gemmological Institute (SSEF). 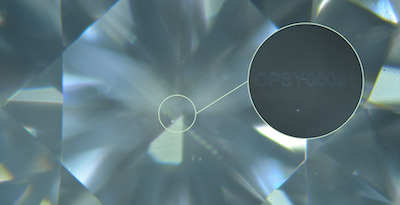 "Diamond traceability and security are important issues in the diamond supply chain, and it is important that such scientific techniques be developed for the trade and to ultimately strengthen consumer confidence,” said Dr. Michael S. Krzemnicki, Director of the Swiss Gemmological Institute SSEF, Basel.

In contrast, a Loupe ID (below) is larger and denser and can be used in strategic places, such as the center of the table, to allow valuers, grading houses, and consumers to quickly distinguish laboratory-grown or branded items from natural diamonds. This group of identifiers is so named because of their visibility using a standard 10x loupe and can be placed at depths of up to 0.25 millimeters (250 microns) beneath the surface of a diamond. 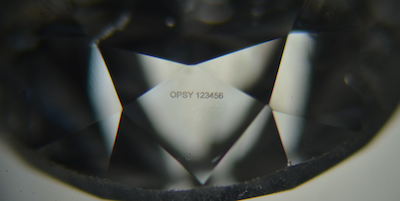 Neither identifiers affect the surface polish of a diamond, meaning security features can be placed beneath the surface without compromising its finish and/or value.

With this technology, the natural diamond trade can include secure identifiers within its diamond supply without compromising the factors that ensure rarity and market value. By establishing the techniques to create its most invisible identifiers to date, Opsydia is introducing the natural diamond sector to a unique methodology for addressing its core challenges, such as enhancing stone security, establishing bold traceability initiatives, and protecting against fraud, non-disclosure, and other counterfeiting concerns.