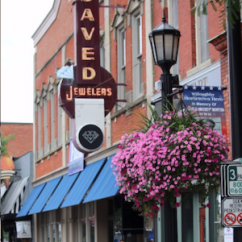 Willoughby, OH—When Steve Manno and Tom Mirabelli were asked about buying DavEd Jewelers (image) in 2011, they didn’t hesitate. 10 years later, the 76-year-old jewelry store is still going strong and remains a fixture in downtown Willoughby, a suburb of Cleveland.

The pair were recently feted in their local paper, The News-Herald. “We’ve been lucky with the community and to be a part of the city. I count my blessings every day,” Mirabelli told the paper.

This isn’t the store’s first feature in the paper. Last year, Manno and Mirabelli—friends since high school—were recognized for their efforts in preserving the store’s historic sign, a joint effort between the jewelers, their building landlord (who’s also the town’s mayor), and the Heart of Willoughby organization, a local nonprofit dedicated to downtown preservation.

DavEd Jewelers began when Dave Fertile, a Cleveland diamond merchant, and Ed Wiles, a local realtor, founded the business in 1945 and created the store name out of their combined first names. Tom J. Nichols, owner of Nichols Jewelry in Cleveland, managed the store for its first six months in 1945, then with his brother Harland, bought it outright from the partners and closed Nichols Jewelry. The Nichols brothers kept the DavEd name.

Tom J.’s son, Tom W. Nichols, worked in the store starting in childhood, after school and during summers, later inheriting the store from his father and uncle. It was he who sold the store to Mirabelli and Manno in 2011 after working there for a total of 66 years. He’s still fondly remembered by longtime customers to this day, say Manno and Mirabelli.

“This had been for sale, and I kept getting bugged to buy it,” Manno recalled. “(Tom W.) said, ‘It’s now or never. A lot of people want to come here.’ I called (Mirabelli), who was living in Columbus, and I said, ‘Do you want to buy a jewelry store?’ And he said, ‘Sure. I’ll do that.’ He quit his job, was up here in a couple of days, we signed the papers, got the key and went right in.”

Like most independent jewelers, the owners’ favorite part of the business is their customers. Both enjoy spending time—often as much as an hour—helping customers find just the right piece or working with them to design a custom piece.