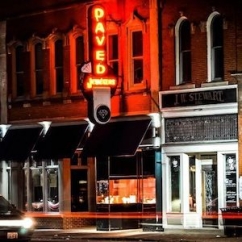 Willoughby, OH—For 75 years, DavEd Jewelers’s vertical neon sign has been an iconic part of the landscape of Erie Street in downtown Willoughby, Ohio, a suburb of Cleveland. But over time the sign rusted and deteriorated, and fixing it would be a costly process. Then a local nonprofit dedicated to restoring Willoughby’s historic downtown stepped in to help.

Tom J. Nichols, owner of Nichols Jewelry in Cleveland, managed the store for its first six months in 1945, then with his brother Harland, bought it outright from the partners and closed Nichols Jewelry. The Nichols brothers kept the DavEd name, eventually passing the business down to Tom J.’s son, Tom W. Nichols.

In 2011, Tom W. Nichols sold the business to Tom Mirabelli and Steve Manno, a pair of young entrepreneurs. Manno’s father, who had a watch repair shop in Cleveland, had done some work for DavEd, and his son developed a passion for buying and repairing both vintage and modern high-end timepieces like Rolex, Breitling, and Omega. In addition to watches, he went on to learn about wholesale diamond buying, estate jewelry, and more.

Mirabelli—friends with Manno since high school—had 14 years’ experience in the retail side of jewelry. Starting as a sales associate for a major chain retailer, he quickly worked his way up, traveling around the Midwest as a sales manager, and earned credentials from both GIA and DCA.

The two new owners are striving to carry on the DavEd/Nichols legacy, but they’ve tweaked the appearance and merchandise to create a more modern feel and have made a specialty of buying and/or re-creating customers’ old-fashioned jewelry into new modern styles, as well as appraisal, repair, and engraving pretty much anything a customer wants. 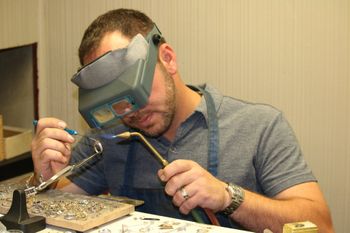 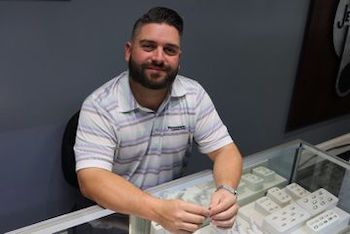 Enter the DavEd sign. Though badly in need of repair, its iconic status on Erie Street and now retro-cool design appeal spoke to Heart of Willoughby, a nonprofit organization that was formed 40 years ago to preserve Willoughby’s historic downtown when the area—like many others around the nation—was struggling.

The original sign contained a Gruen clock, made by the now-defunct Cincinnati-based watch brand, says an article in the News-Herald. It also spelled out the DavEd name in neon, which was allowed under a grandfather clause because of its historic roots. New neon signs are not allowed in the downtown district, says the article.

A local sign and lighting firm did all the work, which included restoring the original clock face and installing a new mechanism. The entire sign was repainted and the neon tubes replaced and upgraded. The total cost of the project was $8,500, split between DavEd’s current owners, their building’s landlord—who also happens to be the town mayor—and the Heart of Willoughby organization. The sign in cartoon form is also now the jeweler’s logo.