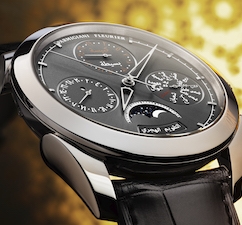 Fleurier, Switzerland—WatchmakerParmigiani Fleurier has been awarded the Innovation Prize from the Grand Prix D’Horlogerie de Genève for its creation of the first Hijri perpetual calendar wristwatch. The Hijri calendar, also called the Islamic or Muslim calendar, is a lunar calendar where the beginning of each 29- or 30-day month is contingent on the visibility of the moon at the end of the previous month. In contrast to the solar Gregorian solar calendar used in the west, the Hijri months change annually by a difference of -10 to -12 days. The Hijri calendar current year is 1441, as the calendar began after the Hijrah of the Prophet (PBUH) to Madina.

The Hijri Perpetual Calendar watch features a 44.5 mm platinum case, a slate dial and rotor in platinum. It shows the hours and minutes, and date in Arabic numerals, the name and length of the months in Arabic calligraphy, as well as the abundant and the common years. It also features a moon phase in an aventurine sky and a power reserve of up to 48 hours. As seen in all Parmigiani Fleurier timepieces, every single component of the movement, even the hidden parts, are decorated by in-house specialists.

The original development of the watch dates back to 1993, when brand founder Michel Parmigiani restored a simple Hijri Calendar and a pocket watch from the end of the 18th or beginning of the 19th century, that featured a solar calendar translated into Arabic. This led Mr. Parmigiani to create the first-ever Hijri Calendar table clock, and today to the first wristwatch featuring this complication. The Hijri Perpetual Calendar has been carefully designed in consideration of the most intricate elements of Arabic architecture, culture, and religion.

“We would like to thank all the people who collaborated with us on this incredible project,” said Davide Traxler, CEO of Parmigiani Fleurier. “At Parmigiani Fleurier we stand strong in our belief in solidarity, in the power of community, in being inspired by the work of greats who have come before us, in inspiring future generations, and sharing the gifts of watchmaking with industry colleagues and those around the globe who appreciate the artistry of our work. The international community of watch admirers and devotees is a motley of cultures and traditions; we celebrate this diversity in our own way with the Hijri Perpetual Calendar, and we hope that- as an industry and as citizens of the world- we will also embrace it in the people we choose to represent and lead us.”