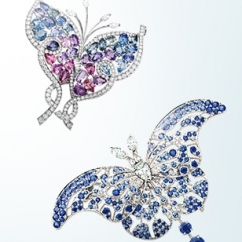 Philadelphia, PA—Luxurious jewelry was on the minds as well as the necks of ballet-lovers at the opening night of the Pennsylvania Ballet’s 50th season last week. The event, which typically attracts Philadelphia’s high society, was particularly noteworthy for its performance of George Balanchine’s Jewels, a tribute to the creations of jewelry designer Claude Arpels, one half of the legendary duo that formed the Van Cleef & Arpels jewelry house.

Balanchine’s masterpiece ballet comprises three distinct gem-themed sections: “Emeralds,” “Rubies,” and “Diamonds,” evoking three different moods and three different cultures through music. “Emeralds” is inspired by the traditional elegance of France and is set to the music of French composer Gabriel Fauré. “Diamonds,” meanwhile, evokes the grandeur of Imperial Russia (Balanchine’s own heritage; he was born Giorgi Balanchivadze in St. Petersburg) and it is danced to a score written by Peter Tschaikovsky.

Jazz-infused “Rubies,” scored by Igor Stravinsky, is influenced by Balanchine’s experiences since coming to America in 1933. Co-founder of the New York City Ballet, the choreographer is viewed by many as the father of American ballet.

Jewels was performed Thursday and Friday, October 17 and 18, and will be performed again this Saturday and Sunday, October 26 and 27. For more information, click here. 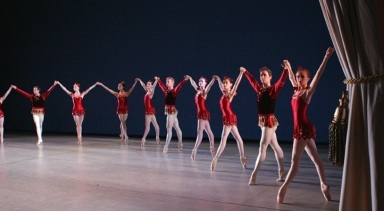