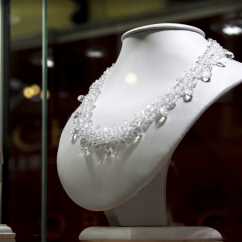 Plainfield, IN--Owners of a jewelry store in Plainfield were forced to temporarily close after a robbery on March 1 caused damages to their store.

According to Fox 59, the owners posted on Facebook that their store, Mason Jewels, was broken into. The people who broke into the property also smashed cases that held the shop's items.

Police officers responded to the call Tuesday morning and found out that at least two suspects may have burglarized the store and have taken an undisclosed amount of jewelry from the store.

The store's owners said that the customers' merchandise was safely locked away, and they'd be reopening the store when possible. This is not the first time the store was robbed. Another robbery in 2019 saw suspects getting away with $10,000 worth of jewelry, according to Fox 59.

Plainfield police are hoping that the store's surveillance cameras could point towards a lead and are investigating the incident. Anyone with information about the morning burglary can contact Plainfield Police Detective Sgt. Brian Bugler at (317) 754-5323 or buglerb@plainfieldpd.org. Information can also be provided anonymously by calling Crime Stoppers of Central Indiana at (317) 262-TIPS.

Read more details on the robbery in this report.

Next article:
Women Designers and Leaders Lauded By AGS