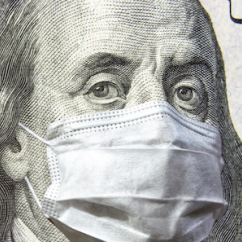 Merrick, NY—How do you plan a long-term strategy for your business when you still can’t confidently plan for the next week? (Image: theamericanmarketinggroup.com)

After seeing upticks in consumer spending and hiring in May, it looked like a V-shaped recovery might be possible after all. But that was before virus cases surged across the Sunbelt, along with nationwide social unrest following the killing of George Floyd. Mark Zandi, chief economist at Moody’s Analytics told Fortune magazine there’s “zero chance” of a V-shaped recovery, and the Conference Board’s July figures show consumer confidence declining.

There’s positive news about jewelry sales but worrisome news about impending layoffs. Consumers and retailers alike are quickly adapting to digital shopping, but it’s hard to peddle luxury clothes and accessories to people who don’t know when they’ll next have a reason to wear them. Even jeans are a tough sell right now. And while recent news has been encouraging for independent jewelers, a report from The American Marketing Group says spending for jewelry and watches was off 18.1% for the first five months of 2020.

Eventually the pandemic will end. We don’t know when that will be or what a “new normal” will look like, but consumers will again leave their houses, attend events, and mingle with others. But it’s a sure bet that consumption and shopping behavior will look different when they do.

As the pandemic unfolded, consumer spending shifted immediately from discretionary to necessity purchases and remained that way for the first five months of the year, amounting to a $269 billion loss in consumer spending in that period, says AMG’s report.

Encouraging signs began appearing in June. Chinese consumers emerging from lockdown went on a luxury bender, dubbed “revenge shopping.” There’s some evidence that U.S. consumers are doing likewise. June data from The Edge Retail Academy showed retail jewelry sales up for the first time in months. And at the King of Prussia Mall in Pennsylvania, the nation’s second-largest shopping center, customers were lined up outside luxury stores like Gucci and LVMH when the mall reopened in June after 3 months in lockdown. Because Pennsylvania state law still limits capacity in stores and restaurants, would-be customers often wait an hour or more for their chance to shop.

Go where the money is. In the aftermath of the pandemic, The American Marketing Group says brands and retailers will need to focus on the consumers that have the need, desire, and, most importantly, ability to spend. In other words, the affluent. That’s no different from prior recessions. What is different, however, is going to be the affluent market’s mindset, priorities, and values.

First, it’s important to understand the four segments of affluent consumers and how each is going to be impacted by the recession. Here’s how The American Marketing Group defines them: 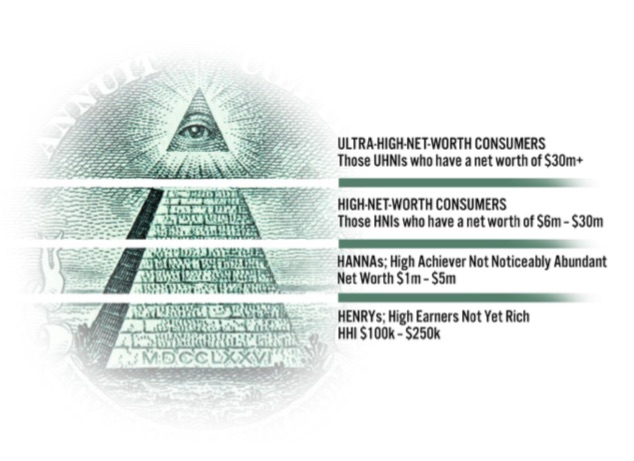 It would be naïve to assume they won’t be impacted at all. The first wave of pandemic-induced layoffs was concentrated on lower-income service workers, but as more and more major U.S. companies announce impending layoffs of significant numbers of workers, there will be many high earners among those.

Indeed, the creative class and professional HENRYs are starting to experience layoffs as well as pay cuts, says luxury expert Pamela Danziger of Unity Marketing, one of the collaborators on the American Marketing Group white paper. But they’re still less likely to be negatively impacted than lower income groups, and the fact that they have highly transferable skills makes extended unemployment less likely for them.

“If we look back to the last recession, which also impacted high-earners, they quickly recovered and households at the $100k+ income levels became the fastest growing income segment over the last ten years,” she told The Centurion. They did fine coming out of the [Great] recession. And I expect it will be the same this time.”

But attitudes about luxury will change. “As the affluent emerge from their cocoons where they have had ample time to reflect on what’s most important to them now and in the future, their spending habits are likely to take a radical shift. They will refrain from indulging in luxury goods as much as their income allows, to saving and only occasionally indulging in more modest, discreet luxuries where high quality and long-lasting utility take precedence,” says the report. 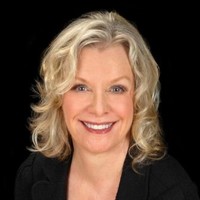 Pam Danziger, a luxury market research expert, says higher-income consumers recovered faster in the Great Recession and should do likewise in this one. But nobody knows when that recovery will start.

A macro trend that’s already emerging is wellbeing, which will encompass physical, emotional, and financial health and security. Wellness and sustainability—two trends already on the rise before the pandemic hit—will be subsumed as micro-trends within the overall “wellbeing” macro trend.

During quarantine, consumers floored the accelerator on home decluttering, another trend already well underway before the pandemic hit. Almost half (47%) of affluent consumers in a YouGov survey reported decluttering, the number-two activity after connecting with friends and family online (57%). Other activities getting a boost include crafting and hobbies (35%) spending time outdoors (26%), and exercising (23%).

Danziger and her peers emphasize that the decluttering trend is especially relevant to note: affluent consumers are likely to use the same rigorous standards they applied to cleaning out their closets when deciding whether to buy something new.

“It will be a radical check on our blatant consumerism. People have been forced to stop it, and they realize that it doesn’t matter. It doesn’t make them happier,” says Beth McGroarty, director of research and public relations at the Global Wellness Institute.

Luxury spending is based on emotion, not need. Using Maslow’s famous hierarchy of needs, it’s always been safe to assume that luxury consumers’ basic physical and safety needs are met, so shopping is fulfilling their higher-level social, esteem, or self-actualization needs. But the coronavirus has upended that and now those consumers—like everyone else—are feeling a sense of insecurity at a most basic level, says psychologist Chris Gray, founder of Buycology. “The intensity of that anxiety is new to most of us, and customers can only manage that level of anxiety for so long.” 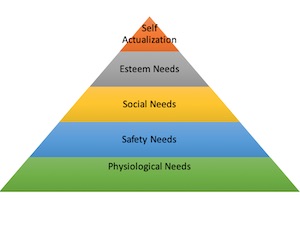 Marketers have always assumed that affluent consumers have their basic physiological and safety needs, such as food, water, shelter, and physical wellbeing, met. But the COVID-19 pandemic is upending that assumption.

The spending that comes after hard times is more about identity and security, he says, which explains the Chinese “revenge spending” trend. But Michael Baer, managing director of U.S. Ipsos Affluent Intelligence, cautions that backlash spending is short-term and won’t last. Ipsos found that affluents’ feelings of financial anxiety persisted long after the Great Recession ended, and predicts the same will happen now, especially since the true global financial ramifications of the coronavirus are still unknown.

But something else is different. In the Great Recession, affluent consumers who weren’t negatively impacted were loath to flaunt their wealth in front of peers who were. That’s likely to be the case again, but now both the pandemic and social unrest have put a harsh spotlight on the extent of income inequality in the United States and it’s making consumers uncomfortable.

In the early days of the pandemic, media reports showed rich Americans fleeing on private jets to exclusive isolated beach homes while the lower classes struggle with rampant outbreaks of virus. Then the looting that broke out nationwide after George Floyd’s death often targeted luxury shopping areas, something that never happened in prior periods of social unrest. Whether consumers simply see overt displays of wealth as distasteful or they’re genuinely afraid, it will impact shopping behavior.

Ultimately, says the report, the journey, not the destination, will be the goal for luxury consumers. It’s about the emotion and wellbeing, not the acquisition of the most stuff.