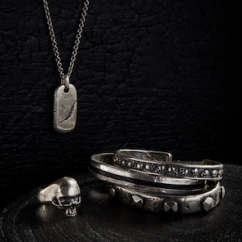 New York, NY—Following its successful launch last fall, the Spring 2019 collection of John Varvatos men’s jewelry incorporates the distinctive design features for which the brand is known. The JV “rebel spirit” can be seen throughout with signature details such as rivets, skulls, and daggers.

The collection is the result of a design collaboration between Gurhan and John Varvatos, both iconic brands in their respective areas of jewelry and menswear. Prior to launching his own line of upscale designer menswear, Varvatos worked for both Ralph Lauren and Calvin Klein, iconic names in fashion. While at Calvin Klein, he pioneered the idea of boxer briefs underwear for men. Gurhan, meanwhile, became known throughout the jewelry and fashion industries for his signature 24-karat gold and gemstone jewelry.

The collections are currently sold at Saks Fifth Avenue, Nordstrom, Bloomingdale’s. and John Varvatos boutiques, and will be on display at Centurion Scottsdale. 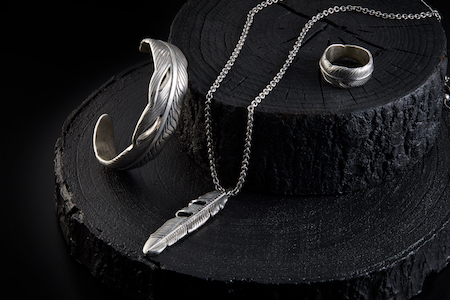 Scottsdale, AZ—Harry Kotlar is inviting Centurion retail attendees to learn its history with a special immersive exhibit celebrating its 70-year anniversary. The Harry Kotlar salon at Centurion Scottsdale will be styled in a curated museum-style environment, allowing retailers to interact with the exhibit while discovering more about the jewelry design house. The museum style environment--which can be replicated by retailers as an in-store event--will capture both the brand’s jewelry design history as well as the style evolution of fashion’s iconic little black dress, aka “LBD.”

Adding to the museum experience is a custom audio guide which allows retailers to learn the history of Harry Kotlar through the exhibit.

“The salon will give potential retailers an opportunity to experience one of the many facets that a Harry Kotlar luxury experience entails and how we meticulously present it to targeted consumers and media, with absolute measurable results and a 360-degree success in mind,” says Czarah Cabrera, Harry Kotlar brand director. The experience aims to: