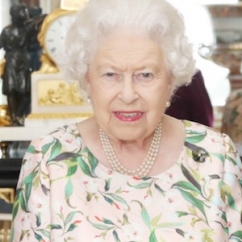 London, United Kingdom—Renowned Washington, DC jeweler Tiny Jewel Box got a jolt of worldwide recognition last week as Britain's Queen Elizabeth II wore a vintage brooch that came from the store. The Queen—who like former U.S. secretary of state Madeleine Albright adores fancy brooches—donned a pin named the American State Visit Brooch last Thursday, the day president and Mrs. Trump arrived in London. The ornament, a small green flower crafted in 14k yellow gold with diamonds and moss agate, was a gift from Barack and Michelle Obama during their state visit to the UK in 2011 while he was president. The Obamas hand-selected the Queen’s gift from Tiny Jewel Box. 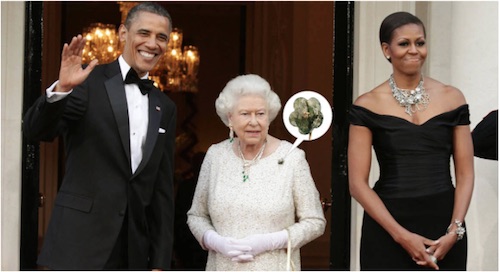 But the pin isn't without controversy. Reports worldwide suggest the Queen’s brooch choices during the Trumps’ time in the UK may have been crafted to convey a message. Communicating through clothing is not unusual for the royals: for instance, when Kate Middleton, Duchess of Cambridge, first emerged from the hospital after the birth of Prince George, the blue Jenny Packham dress she wore was a clear homage to the dress William’s mother Princess Diana wore to introduce him to the world. Duchess Kate also chose a pink coat for her last public appearance before the birth of Princess Charlotte and a blue one before the birth of Prince Louis, sparking speculation that they were hints about each baby’s gender. 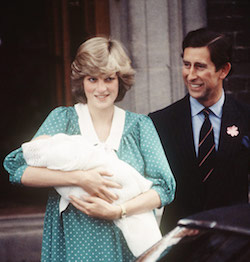 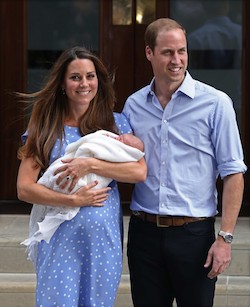 Was Duchess Catherine's postpartum dress meant to be an homage to her late mother-in-law Diana?

The Queen wore the American State Visit brooch to meet with the Archbishop of Canterbury and Sheikh Ahmad Al-Tayeb, not the Trumps. She wore a diamond paisley palm leaf brooch on a royal blue dress (below) to host the president and first lady. Like the majority of the Queen's jewels, it was a hand-me-down: multiple reports in the British media observed it was the same brooch her mother wore to the funeral of King George VI, Elizabeth II's father.

But whether the Queen was sending a message or she simply chose jewelry she happened to like with her dress each day, we likely will never know. 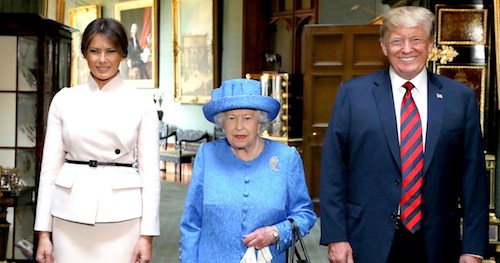