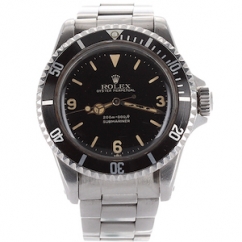 London, UK—The family of a deceased miner struck gold, so to speak, after his passing. The late miner left behind a rare Rolex Submariner 5512 with the 3-6-9 Explorer dial, something The Robb Report says is the “Holy Grail of vintage watches.” Image: Gardiner Houlgate.

While a Rolex of any kind is likely to hold its value, this particular one is something of a unicorn. Says The Robb Report, “The piece’s new six-figure value is largely due the watch’s exceptionally rare 3-6-9 explorer dial. Submariners featuring this face were only produced for a short period during the early ‘60s, and very few known examples exist with this Crown 62 dial variation. That’s because when the watches were returned to Rolex for servicing, their original dial was typically replaced with a new one. Luckily, this rarity still sports its original. What’s more, it was sold with its original box, guarantee/service booklet and scanned images of the original owner wearing his pride and joy.” The miner who originally bought the watch died in 1995, leaving the watch to his daughter and son-in-law, who auctioned it off.

Although this model is exceedingly rare, Gardiner Houlgate has sold nine of them, says Robb Report. Prior to this one, the most recent was in 2016. That one went for £192,000, which at the exchange rate of the time was also about $250,000. 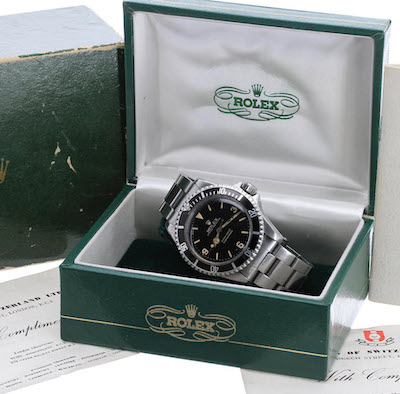 The Rolex auctioned last week in England still had its original box and paperwork, along with images of the original owner wearing it. Image: Gardiner Houlgate.

Previous article:
Luxury Retailer Bloomingdale’s Gears Up For A Different Kind of Holiday