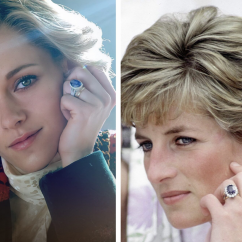 Los Angeles, CA--Pablo Larraín's 2021 historical fiction psychological drama "Spencer" wasn't just another movie on the life of Princess Diana and the Royals. It was a unique project for the Chilean director.

“It’s about finding herself, about understanding that possibly the most important thing for her is to be well, and to be with herself and by herself," Larraín told Deadline in an interview. "That’s why the movie is called Spencer, which is the family name she had before she met Charles.”

"Spencer" also stood out for reimagining Diana's jewelry and decorating it on Kristen Stewart, who played the role of the princess in the movie.

The jewelry designs were created by Mouawad, and each of those pieces — diamond engagement ring, sapphire, necklaces, and pearls — have been modeled after the jewelry worn by the later princess.

In an exclusive, Natural Diamonds takes a closer look at these designs to showcase the details that went into the items.

Previous article:
Thieves Flee With $1 Million Worth of Items in a Chaotic El Monte Smash-and-Grab Robbery

Next article:
A Combination So Everlasting: Finding Diamonds on Their Musical Trail