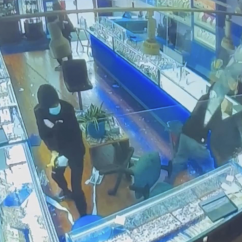 According to a news report, the smash and grab robbery, which was caught on security camera, took place at David's Jewelers. The video showed robbers using hammers to smash jewelry cases.

The store employees resisted by throwing chairs, a trash can, and a calculator along with other items, at the intruders.

The owner told the outlet that he went to the back of the store to fetch a gun, only to realize he had left it at home.

The report stated that the thieves fled with gold jewelry worth $1 million. The store owner and his wife were injured in the incident. The owner was struck in the eye with a hammer, whereas his wife lost a tooth after being hit in the mouth.

"I punched one of them," the store owner said in the report. "I grabbed him outside. I was kicking him, and that’s when I got hit with a hammer in the face.

The store has asked for help in identifying the attackers and has posted images of the robbery on its Facebook page.

Read more and watch the video in the original post.

Check out the pictures here.