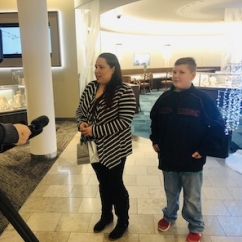 Omaha, NE—Jennifer McKinney of Council Bluffs, IA, is the proud owner of a new diamond ring worth almost $5,000 from Nebraska retailer Borsheims, and she has her young son to thank for it. 11-year-old Adam McKinney asked his mom to ring bells with him for The Salvation Army this holiday season. After a four-hour bell ringing shift at a Council Bluffs Hy-Vee supermarket, Jennifer McKinney was automatically entered in the Borsheims Big Ring contest. This Monday, she was announced as the winner of a 14k white gold round diamond ring that retails for $4,950. (Left: Mother and son at Borsheims being interviewed on local television.)

The Borsheims Big Ring contest is in its fourth year. The contest, in partnership with The Salvation Army, has successfully helped increase the number of bell ringers in Omaha and the surrounding communities during The Salvation Army’s Red Kettle campaign. All bell ringers who fulfilled at least one two-hour shift during the holiday season were entered into the contest.

Borsheims president and CEO Karen Goracke and Major Adam Moore from The Salvation Army presented the ring to McKinney and her son in front of a crowd of cheering Borsheims employees and customers. In addition to running the Big Ring contest, Borsheims also encourages its employees to sign up for bell ringing shifts across the city, and supports The Salavation Army year-round.

McKinney says she already has a diamond ring, but plans to keep this one and wear it on another finger. And, she noted, it was a perfect fit!

Previous article:
2019 Holiday Is Luxury Jewelers’ Strongest Ever, But Not Because Of Millennials

Next article:
Editorial: The Top Trends That Will Change How You Do Business In The New Decade