Merrick, NY—Something to smile about indeed! More than 80% of jewelers--the most ever--told The Centurion’s Holiday Sales Success Index survey that sales increased for the 2019 season over the 2018 holiday season. These results far outpace every Centurion holiday survey since 2012, including the upbeat results of 2018, when 60% of respondents reported year-on-year gains. The last time almost as many jewelers reported a blockbuster season was in 2013, when 77% of respondents to the Sales Success Index survey that year said their holiday season sales were up over the prior year.

But there was one glaring note of concern: the sales gains this year did not come from Millennial shoppers.

Upscale jewelers again greatly outpaced both general retail holiday spending and the rest of the jewelry industry. According to Mastercard SpendingPulse, which provides insights into overall retail spending trends (across all payment types, not just its own card), holiday retail sales for 2019, ex auto, grew 3.4% over 2018 for the two-month period from November 1 to December 24. SpendingPulse also reported a 1.8% growth in total retail sales across the entire jewelry sector. Online sales growth in the jewelry category grew 8.8% year-on-year, something Mastercard says began before the peak holiday season but helped to power the season through to a strong finish.

But compare that to the 62% of Centurion respondents reporting sales gains of at least 6% (and the 38% that grew 10% or more over last year and the high-end jewelry sector has reason to smile, as it led the jewelry category by far.

How Was Business For The Entire 2019 Holiday Season, Compared To Your Holiday Business Last Year? 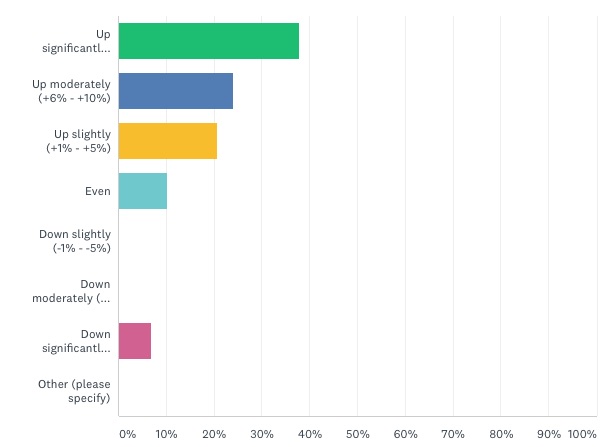 The 3.4% growth in total holiday retail sales is well below the 5.6% growth recorded by SpendingPulse last year, and it’s slightly off the predictions made in October by the National Retail Federation. NRF was anticipating about a 4% jump in holiday sales for 2019, with a probability spread between 3.8% to 4.2%. Other analysts’ forecasts were more optimistic, ranging from 4.4% to 5.3%. Only analytics firm Coresight’s more modest estimate, between 3.5% and 4%, came close to the final figures.

But critical to note is that in all retail categories, e-commerce rocketed. Online sales across the board grew 18.8% over 2018.

“E-commerce sales hit a record high this year with more people doing their holiday shopping online,” said Steve Sadove, senior advisor for Mastercard and former CEO and chairman of Saks Inc. “Due to a later than usual Thanksgiving holiday, we saw retailers offering omnichannel sales earlier in the season, meeting consumers’ demand for the best deals across all channels and devices.”

Some results from other categories Mastercard SpendingPulse studied:

Big brand and product sales winners this season were both usual suspects—diamonds and Rolex—but also Gabriel & Co. and custom or private label pieces. Estate jewelry and pre-owned luxury watches also were strong performers. Other standout brands for the season were Hearts On Fire, David Yurman, Roberto Coin, and Mikimoto.

When asked “To what do you attribute any major uptick (or falloff) in business for the total year,” jewelers’ responses were evenly distributed between a strong economy and much better marketing or merchandising on their part, as well as quite a few that said “wish I knew!” Among those whose sales declined, most named specific causes ranging from losing a popular brand to losing a superstar salesperson. 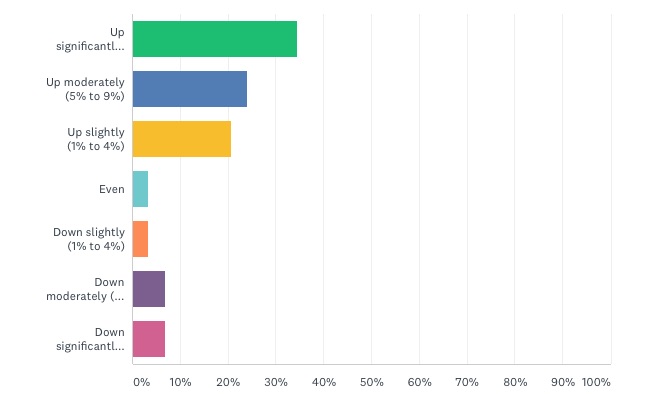 Finally, the alarming finding in The Centurion’s survey this year: despite recent studies to the contrary, better jewelers are still having trouble attracting Millennials. Last year’s survey showed it’s a problem, but it’s noticeably worse this year.

Who Were The Majority Of Your Customers This Season? 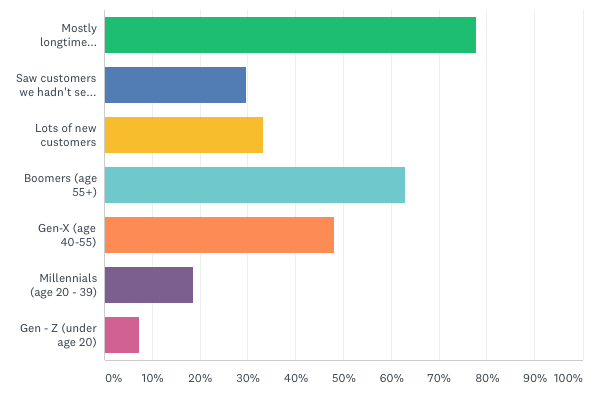 Gen-X customers (age 40-50) stayed consistent with last year; about half of respondents reported this demographic as a major contributor to sales.

There were two bright spots: about one-third of respondents saw a lot of new customers this year, and about 7% of respondents reported Gen-Z is starting to shop for fine jewelry. This demographic didn't register at all in the 2018 survey. (Note: Respondents were allowed to check multiple options, hence totals add up to more than 100%.)