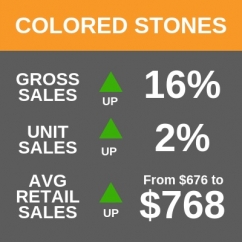 Merrick, NY—Colored stones and pearls were a standout category in a strong September overall, says the latest jewelry retail sell-through data from The Edge Retail Academy. Meanwhile, retail experts are predicting holiday sales gains of about 4%, and possibly topping 5% over 2018.

September was a solid month for jewelry sales, with colored stones leading the way. Omaha, NE-based The Edge says over three weeks in September, the colored stone and pearl category combined (left) leapt 16%.

Colored stone jewelry alone—minus pearls—rocketed 19% in gross sales year-on-year, and 3.4% in unit sales. The average retail sale went up more than $100, from $823 to $927, as well. For the full year period ending in August, the category is up a comfortable 6%, with gross profit up 7%. Even better, gross margin is a healthy 52, says Sherry Smith of The Edge. “Units remained flat but with the average store selling approximately 170 units in this category, it is well worth you running a colored stone performance report for the past 365 days.”

The Edge recommends doing this for all categories to identify what product and price points are working in your store and make sure you're stocked for the fourth quarter.

Although not as strong a performer in terms of year-on-year gain, diamonds also trended up in sales growth and units. Gross sales were up 5% year on year in September and unit sales were up 6%, but the average ticket dipped both year-on-year and from August. Year on year, the average diamond ticket dropped from $2198 to $2175; but it also dropped just from August’s average of $2291. 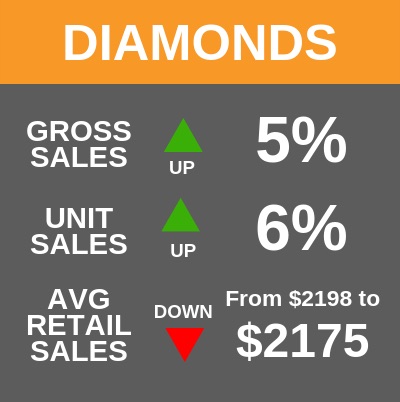 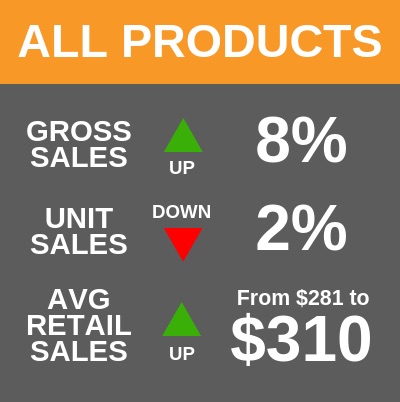 The Edge's sell-through data for diamonds and all products in September.

In the broader retail picture, experts are equal parts optimistic and cautious, but early predictions are fairly bullish. The National Retail Federation last week released its annual holiday sales forecast for 2019, predicting holiday retail sales during November and December this year to increase between 3.8% and 4.2% over 2018, to a total of between $727.9 billion and $730.7 billion. NRF’s numbers, which exclude automobile dealers, gasoline stations, and restaurants, compare with an average holiday sales increase of 3.7% over the previous five years. 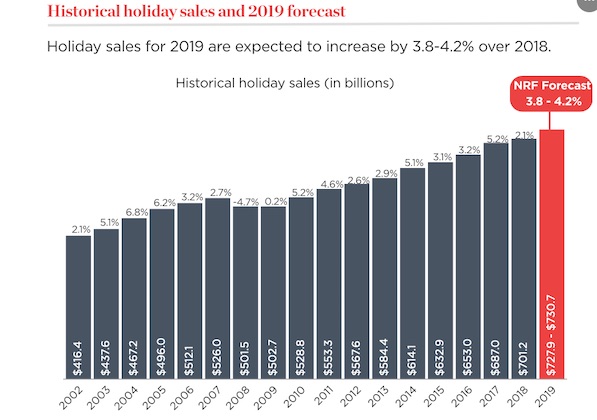 “The U.S. economy is continuing to grow and consumer spending is still the primary engine behind that growth,” NRF president and CEO Matthew Shay said. “Nonetheless, there has clearly been a slowdown brought on by considerable uncertainty around issues including trade, interest rates, global risk factors and political rhetoric.”

Consumers are in good financial shape and retailers expect a strong holiday season, he added, but warned that confidence could be eroded by continued deterioration of these and other variables.

“There are probably very few precedents for this uncertain macroeconomic environment,” said NRF chief economist Jack Kleinhenz. “There are many moving parts and lots of distractions that make predictions difficult. There is significant economic unease, but current economic data and the recent momentum of the economy show that we can expect a much stronger holiday season than last year. Job growth and higher wages mean there’s more money in families’ pockets, so we see both the willingness and ability to spend this holiday season.”

While other experts’ consensus is bullish, it comes with a big asterisk, as explained in this report on RetailDive.com. Two global consulting firms, AlixPartners and Deloitte, offered predictions from 4.4% to 5.3% (Alix) and 4.5% to 5% (Deloitte). A third consultancy, Coresight Research, offered a more modest estimate of 3.5% to 4% year-on-year holiday sales increases, but noted that could rise if gas prices remain low.

But as mentioned, these numbers come with more than one asterisk: in addition to the macroeconomic factors NRF’s Shay and Kleinhenz cited, and with which the other experts concur, the projected increases also are based off a disappointing season last year.

Holiday sales during 2018 totaled $701.2 billion, an unusually small increase of 2.1% over the year before, when a government shutdown, stock market volatility, tariffs, and other issues took a toll on spending. Additional information about prior holiday spending is available on the NRF Winter Holidays web page.

Deloitte’s economic forecaster Daniel Bachman told Retail Divethat increased consumer saving also is playing a role in lower demand, and he’s not alone in that belief. A recent research note from investment firm Raymond James made news with the theory that thrifty, savings-minded Millennials might actually be causing slower economic growth. Many Millennials were deeply scarred by the Great Recession, and despite their love of small luxuries like fancy cellphones and avocado toast, they’re savers. The current U.S. personal savings rate is 8.1%, a figure that, while far from the highest it’s ever been also is far from the lowest, and is much lower than the free-spending Boomers typically saved. While good for personal balance sheets, its impact on an economy 70% driven by consumer spending is noticeable. Here's a chart from CNBC: 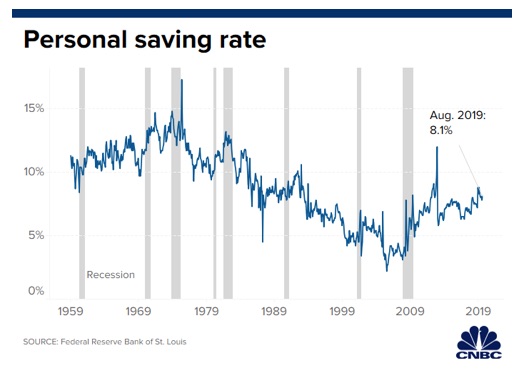 Another factor that may temper holiday spending this year are the new tariffs put in place by the Trump administration. The effect of the tariffs on holiday spending—either directly or through their impact on consumer confidence—remains to be seen.

Some holiday merchandise, including apparel, footwear and televisions were subject to new tariffs as of September 1, while other products will have the tariffs applied on December 15. Retailers are using a myriad of mitigation tactics to limit the impact on consumers, so that impact will ultimately vary by company and product.

Small businesses have already been forced to raise prices, and 79% of consumers surveyed for NRF in September were concerned that tariffs will drive up prices and potentially affect their holiday spending.

Online growth. As has been the case in recent years, year-on-year growth for online as a sales channel is likely to register double or more than the total. NRF expects online and other non-store sales, which are included in the overall total, to increase between 11% and 14% over 2018, to between $162.6 billion and $166.9 billion, up from $146.5 billion last year. Deloitte’s Rod Sides called convenience “the new retail currency” and said those businesses that can deliver seamless experiences, ample inventory, and speedy fulfillment will be winners.

Overall, retailers seem to be hopeful, if hiring is any indication. Even with trade uncertainty and the increasingly tight labor market, retailers are hiring extra staff for the holiday season, says NRF, which expects retailers to hire between 530,000 and 590,000 temporary workers this year. They hired 554,000 in 2018.

The NRF holiday forecast is based on an economic model that takes into consideration a variety of indicators including employment, wages, consumer confidence, disposable income, consumer credit and previous retail sales. Numbers forecast by NRF may differ from other organizations’ forecasts that define the holiday season as a longer time period or include retail sectors not counted by NRF, such as restaurants.