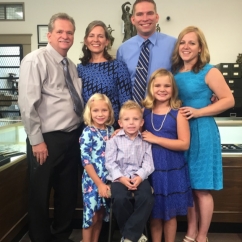 Bellevue, KY—Charlie Cleves was a third-generation jeweler and the owner of Cleves & Lonnemann Jewelers when the town of Bellevue where he’d lived his entire life—just blocks from his store—began to experiencing the struggles that many small downtown business districts were facing. Image: Charlie Cleves and family: Mary Lynn, Mike, Erin, and grandchildren Emma, Aubrey and Sam.

Recently the Northern Kentucky Tribune wrote an article about Cleves’ involvement in the town and the impact he’s had as a business leader over the years, leading up to and including now as its mayor for the past two and a half years.

Cleves & Lonneman was founded in 1932 when In 1932 Ed Cleves, Sr. and Joe Lonnemann, Sr. were laid off from a jewelry store in nearby Covington during the Great Depression. Together they decided to start their own business in Bellevue, repairing watches, clocks, jewelry, and, like many jewelers of the day, also fitted and repaired eyeglasses.

Second generation owner Edgar Nicholas Cleves, Jr. (Nick) began working part time at the store in 1941. Following a stint in the U.S. Navy during WWII and subsequent graduation from college, he started full time at the store, then married his wife, Gert, who also came to work at the store and stayed until 1997. They purchased the business from Ed Sr. and Joe Sr. in 1966, and kept the Lonnemann name on it to honor Joe’s contribution to the business.

Charles “Charlie” Cleves graduated from Northern Kentucky University with a degree in math in 1975, but came into the business fulltime after graduation. He took classes in watchmaking, gemology, diamond setting, silversmithing, and enameling, among others, to enhance the offerings of Cleves and Lonnemann. In 1997 he became the president of the American Watchmakers & Clockmakers Institute. In 1979 he married his wife, Mary Lynn, and they took over ownership of the store upon Nick’s retirement.

But we all know that jewelers don’t really retire. Cleves, like many of his jeweler peers, had been heavily involved with the town’s local business association for more than a decade. While president of the association, he launched the Bellevue Renaissance program to revitalize the downtown. From the paper:

“Cleves had everyone walk the six blocks on Fairfield Avenue to identify the ten worst buildings on the main street. The members saw that five of the buildings were for sale and bought them. Because of this approach, the members were awarded a $300,000 grant from the Main Street committee, which they were awarded again two years later. Cleves continued to buy the worst conditioned properties and now owns seven on the Avenue in order to continue the development and growth of the city of Bellevue.”

By 2017, however, many of the projects had stalled and Cleves grew frustrated. After selling the business to his son and daughter-in-law, he had been looking to start taking it easy, but the problems in Bellevue were boiling over and someone had to step in. That’s when he became a busy mayor instead of the part-time jeweler he’d been planning on. And when the COVID pandemic hit, he was even busier. From the article:

“Since Cleves took the position of mayor, Bellevue has become more business friendly. He believes this is one of his most important accomplishments as mayor so far. Within this historic year, he’s helped all of the restaurants and small businesses take steps to survive the COVID-19 pandemic. Most notably, Cleves reached out to the 17 small bars and restaurants in the city and provided guidance as they applied for $10,000 grants. Of those seventeen, sixteen chose to apply and all received the grant.”

The article continues to list Cleves’ many accomplishments as mayor. Read it in full here.

Next article:
Special ‘Coming Out’ of the Pandemic Sales Strategy Issue