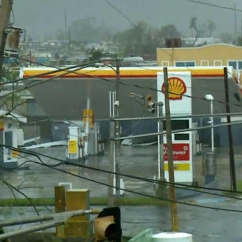 Lighthouse Point, FL—The folks at J.R. Dunn are no strangers to hurricanes. Last year, in advance of Hurricane Matthew, the store’s entire team put business on hold and pitched in to board up windows and secure merchandise. This year, after brushing Puerto Rico and causing a breathless few days of uncertainty along Florida’s east coast, Hurricane Irma took a left turn and only lightly grazed the area. Unfortunately, as we all know, Irma was just the warm-up act for the devastation that would rain on Puerto Rico in the form of Hurricane Maria. (Image at left: a photo from CBS News shows power and gasoline still remain elusive in Puerto Rico more than 10 days after Hurricane Maria hit the island.)

“Irma was nothing in our area. We had some broken tree branches and the electricity was out for a while. We lost a little business, but all in all when you see what happened in Puerto Rico, we’re good,” said Sean Dunn, vice president.

For Dunn, the impact of Maria is personal. His wife, Viviana Alvarez, comes from Puerto Rico and her family is still there. They’re safe, but their lives and the lives of so many on the island will never be the same, says Dunn.

“Some of my in-laws who are in different businesses wonder how long it will take before people feel a sense of normalcy."

Dunn himself feels a very deep tie to the island. “We go down every holiday time. After we finish Christmas at the store, we go down to all different parts of the island to visit family and surf and relax.” 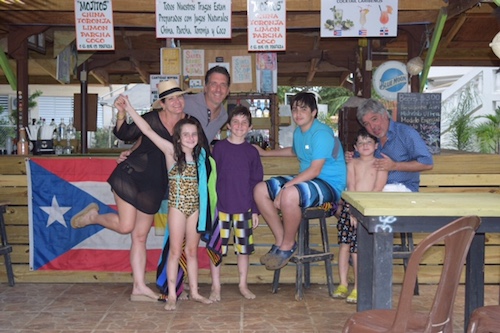 Sean Dunn and family during happier times in Puerto Rico, above, and surfing, below. 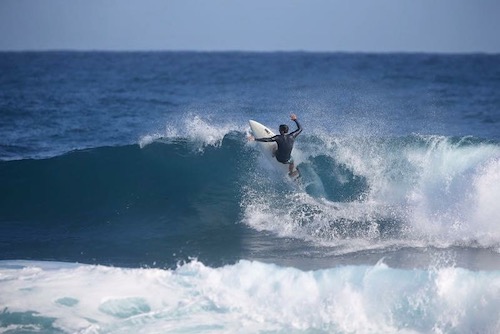 It was that personal connection that spurred him to help. Many of Dunn’s fellow south Floridians also have a connection to the island, and he says there are a lot of heartwarming efforts going on—people using their own private jets to evacuate critically ill people, other groups putting together all the necessities like food, water, diapers, etc.

“Obviously we were very caught up in our own family’s safety and seeing what they’re going through, but I wanted to do something. I looked at all [the things other people were doing] and saw the logistical challenges, so I decided to do my best and find a reputable charity located there and give the best we can.” 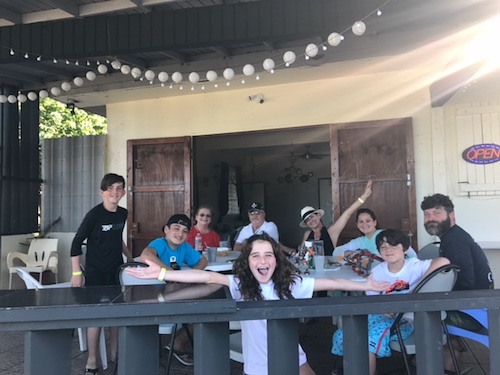 Jeweler Sean Dunn's family is safe, but many wonder when--and how--they their jobs will return to normal.

There is a local food bank in Puerto Rico—Banco di Alimentos—that helps people every day, says Dunn. “It has a warehouse and the experience to deliver, so I looked up the ratings and read what people said about the organization, and I was very impressed. They’ve been doing this for many years, they did it after Irma, and when I saw what they’re doing for people who need help, I found it to be solid. I talked to the family and the company and said let’s do something where the company will match up to the first $10,000 donated, so we set up a GoFundMe page for it.” 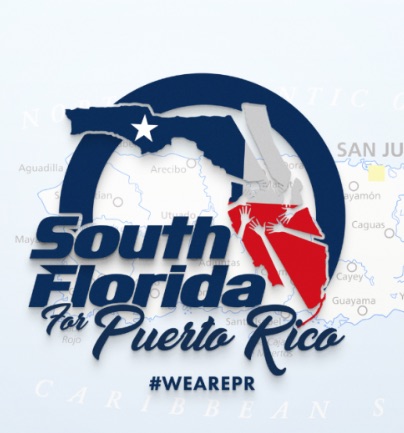 Dunn’s letter on the page reads, “Hi South Florida, I am Sean Dunn and I am creating this go fund me to benefit those in desperate need in Puerto Rico after Hurricane Irma and Maria. 100% of this fund will go to the Food Bank of Puerto Rico.  To get things started, our company J.R. Dunn Jewelers will match the first $10,000 this fund raises. This cause is near and dear to my heart as my wife’s family and many of our friends live on the island.  Thankfully they are ok but there are so many people in Puerto Rico who are less fortunate. This hurricane season has been tough on our entire country, but it’s been especially tough on Puerto Rico. There are many stories of people drinking water from creeks and leaking pipes contaminated with raw sewage, living without food for multiple days, and about 80 percent of the agriculture being completely destroyed. In these conditions, more than 400,000 people have fallen ill and almost 70 have died.”

The page has garnered $7,600 of its initial $100,000 goal in just two days. J.R. Dunn is matching as it goes, says Dunn, and he thinks the real-time match has helped keep people more interested. “People don’t know where to put their funds and don’t know if it will go where it’s supposed to, so they’re happy to see the charity has been researched,” he says. People have a trust factor in the jeweler, says Dunn, so they’re happy he’s vouched for the charity.

The jeweler has spread the word mainly through social media and some texts to clients and friends. “Lots of [our] personal friends have given, and other people in the community, some clients as well. My employees felt really great about it and a lot of them have contributed, so far two days [the total] is not so bad!” Obviously, he’s hoping to push it further and as soon as $10,000 is raised, that translates to $20,000 for the food bank. “It’s set up so that all funds go directly to the charity. None of the funds are going to touch our hands,” he added.

“We’re deciding now if we’re going to email clients, though some already reached out on social media. We have it on all our personal and professional pages, and it got shared like crazy.  We’re also doing some targeted marketing on social in the South Florida market because that’s where people have a connection to the island. People know someone there or have family there or they vacation there and that gets them to spread the word and donate.”

He’s also reached out to the media, both locally and in the trade. “We’re trying to reach out to Feeding America’s web person and see if they will pick it up,” he says. “We haven’t had success with that yet, but it’s still early. You don’t ask, you don’t get.”

Dunn is also trying to get the attention of Daddy Yankee, a Puerto Rican celebrity who’s given $100,000 to the food bank.

In addition to donating money, Yankee was also on the ground handing out supplies personally. “I’m trying to reach out to him to see if he’ll post [our efforts],” says Dunn. 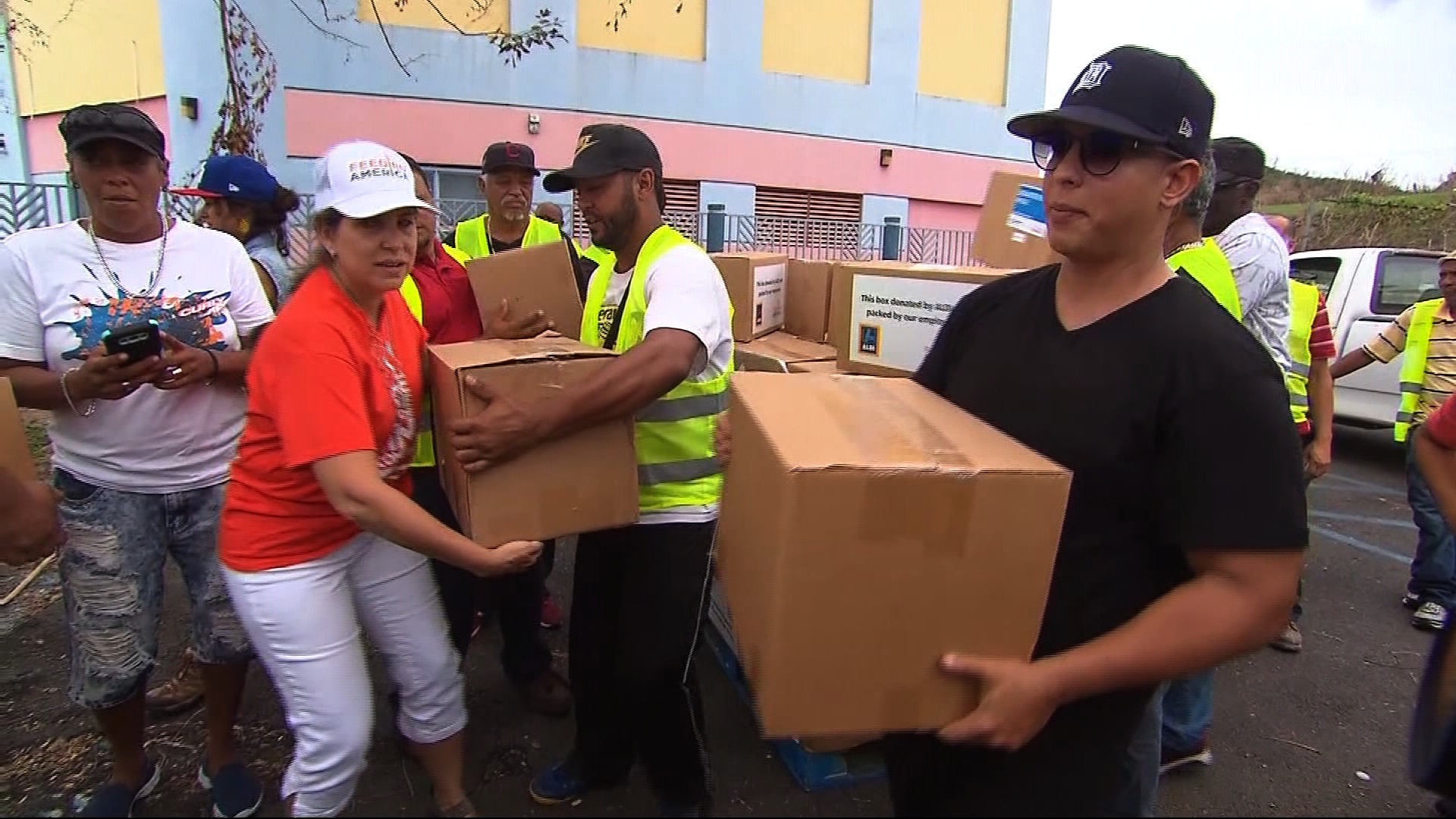 Separately, Marie-Helene Morrow, owner of Reinhold Jewelers, a luxury chain with 12 stores on the island, calls the situation desperate. She and her husband, David, were in Dallas, TX, when the storm hit and thus far have not been able to return. At press time, it was likely to be two more weeks until their building has electricity again, she told The Centurion. Her stores and employees are safe, she says, and she has committed to paying her employees while the stores remain closed. 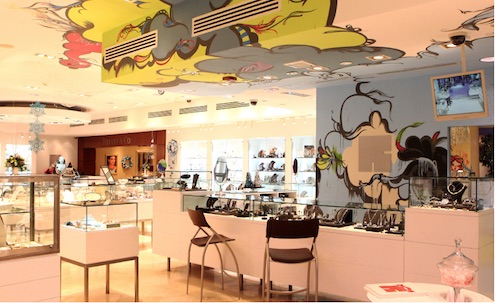 Interior of Reinhold Jewelers' flagship store. Owner Marie-Helene Morrow says it may be a long time before Puerto Ricans are ready to shop for luxuries again.

“They are my family,” she emphasized in an interview with National Jeweler.

But shopping for luxuries won’t be foremost on islanders’ minds. “People have lost everything—their shoes, their socks—everything. They are desperate. There are so many people who are starving,” she told JCK.

And Michigan retailer Randy Cole, CEO of Diamond Vault of Troy, teamed with Centurion president Howard Hauben and Jewelers For Children to create an online raffle and donation site to raise money through JFC for Samaritan’s Purse, a charity with a lot of support systems in the Caribbean. Cole donated luxury pens and a watch to be raffled off; Hauben and Centurion pledged to match up to the first $5,000 in donations.

Previous article:
The Centurion Video Series: How To Be More Productive