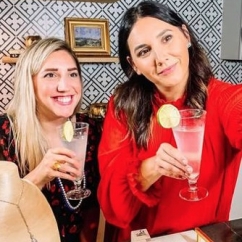 Portland, ME— Pandemic? Been there, done that.

Springer’s Jewelers of Portland, ME, is celebrating its 150th anniversary this year. Putting that into perspective, Ulysses S. Grant was president when the store was founded. It has survived through two world wars, the Great Depression, the Great Recession, and the 1918 Spanish Flu pandemic (which lasted almost two years and yes, was as politically divisive as the current COVID-19 pandemic is today.) The store is the oldest in Maine and one of the oldest in the nation, period. Image: Zoe Beaulieu and Lilly Beaulieu Mullin, the store's fourth-generation owners.

The secret to Springer’s longevity? Adaptability, say the owners of the three-store chain with doors in Portland and Bath, ME, and Portsmouth, NH. In an article in the Portland Press Herald celebrating the store’s milestone anniversary, co-owner Lilly Mullen said, “Change is something we’ve been good at for 150 years.” She told the paper the store has been around so long because it stayed relevant by adapting to changing styles, paying close attention to customers and creative marketing.

Springer’s was founded by George T. Springer in 1870in Saccarappa, ME (now Westbrook), as a dry-goods store, with jewelry being only one category of merchandise. It also sold fine china, eyeglasses, clothing, and more.

“We no longer sell underwear (as we did in 1870), but we still have the most dazzling diamonds around,” says the store’s website.

By 1900, Springer’s had moved to Portland and, in 1925, Edmund Beaulieu Sr. bought the business from the Springer family. Lilly Beaulieu Mullen and her sister, Zoey Beaulieu, who run the company today, are his great-great granddaughters and fourth-generation leaders of the company, incidentally marking the first time the store has been entirely under female leadership.

Over the years, Springer’s grew by acquiring other fine jewelry stores. Springer's Bath store, still in its original historic downtown location—with its original mahogany cabinets and hanging brass lamps—originally was called A.G. Page Co., and was founded in 1879, only nine years younger than the original Springer’s. 100 years later, Springer's acquired it in 1979.

Its Portsmouth, NH store, meanwhile, was acquired in 1971 from the widow of Herman Page, who was one of the first certified gemologists in New England.

Creative promotions have been a mainstay of Springer’s. For instance, in 1947, the store celebrated a move with a win-a-diamond promotion, where customers could purchase a box for $1 and one lucky winner would open it to find a diamond. Customers lined up to see who the winner was.

The jeweler also likes to run the popular weather promotion, where a snowfall of a certain amount on a certain day means a refund for customers’ purchases.

But being a woman-run company, selling jewelry to female self-purchasers isof coursea key focus. Lilly and Zoe launched #empowHERment, a program to partner with local businesses that share their core values of connecting and supporting a community of strong women. They also have dubbed Saturdays as “SatHerDays,” where women are invited to come in and have a mimosa or two and play with jewelry, trying on anything they want so they remember it when they’re ready to buy. 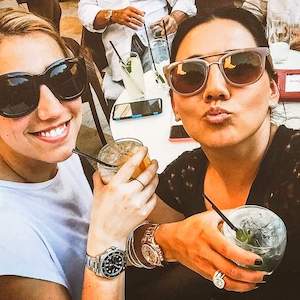 Springers' owners having fun with the girls.

“As a women-run company, we can't help but ask, “Why are we waiting for someone else to buy us jewelry? We are strong, independent women and we want to empower other women to celebrate themselves with a jewelry self-purchase.

We do not need a special occasion to celebrate ourselves or a traditional holiday to justify a jewelry purchase. It is important to take the time to celebrate and express how amazing you really are,” says the store’s website.

So having had experience with one pandemic, how is Springer’s dealing with another?

Pretty much the same way most better jewelers are: after closing for a while at the outset of the pandemic, the jeweler is now coping by limiting the number of customers in-store at a time, adding more appointment-driven sales, requiring masks, disinfecting surfaces and jewelry, keeping hand sanitizer handy, adding touchless pay options, beefing up their online presence, and more.

Springer’s also launched a special benefit purchase program to help schoolchildren during COVID-19. For $20, customers can purchase a canvas “Distance Makes The Heart Grow Fonder” pouch (online only), ideal for keeping everything from hand sanitizer to makeup or, yes, jewelry organized. Proceeds from sales of the 11.5” by 5.5” pouches go to the emergency fund of Full Plates Full Potential, a program to ensure that Maine public schoolchildren who rely on school breakfasts and lunches will still have access to meals during COVID-19 even if school is closed. 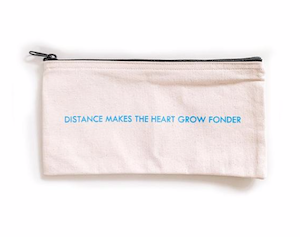