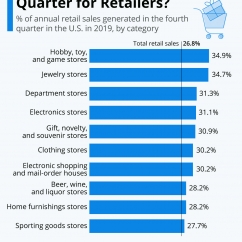 New York, NY—Conventional wisdom says that the weeks leading up to Christmas are the most important time of the year for retailers in the United States. Of course, that’s no surprise to jewelers, who run a very close second only to toy retailers in their reliance on the holidays to make or break a year. Image: Statista.com

Anecdotally, better jewelers have been telling The Centurion for some time that their annual sales totals are growing less dependent on the holidays—but so far the figures from the U.S. Census bureau and reported on Statista.com don’t show that happening in the jewelry industry at large.

According to the National Retail Federation, Americans are going to spend between $755 and $767 billion in the months of November and December this year, with average spending for gifts and other holiday-related items amounting to $998 per consumer.

If retail sales were distributed evenly throughout the year, the holiday quarter should account for 25 percent of each year’s total sales. As Statista’s chart illustrates, most retailers’ holiday sales clock in way above that benchmark, with jewelry stores generating more than one-third (34.7%) of their 2019 sales between October and December last year, running a very close second to toy retailers who generated 34.9% of their annual sales during the period.

Across all categories, the holiday season is not as important as one might think, though it still accounts, on average, for 26.8% of total 2019 retail sales in the United States.

This year, it’s not inconceivable that jewelers may log a much bigger number, with many reporting that pandemic-grounded customers are spending their vacation and entertainment dollars on jewelry instead. But experts caution that once vaccines are available and restrictions are lifted—theoretically by Q2 or Q3 of 2021—pent-up demand for travel and experiences may detract from jewelry sales for a while.

Next article:
Couples With Baby Stroller Prove To Be Jewelry Thieves, Not Parents