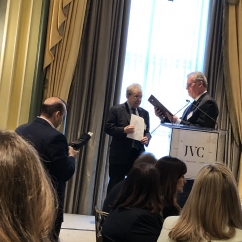 Joel Schechter, CEO of Honora pearl company and son of the late Steven Schechter, presented the award, which he said was personal honor because their friendship and business relations went back 50 years. They served on many boards together over the years and Schechter says that Kaiser has this amazing rapport with people and was able to get some of the biggest brands in the world to provide funding and intellectual support to many of their endeavors.

“Steven is a worker and a builder,” Schechter said. “He builds companies and intellectual relationships. He just has this absolute infinity for people in a way I’ve never seen…. Steven would pick up the phone and call anybody. You need that in your character to just be fearless and speak to anybody.”

Kaiser talked about the importance of JVC to the industry and his relationship with Joel and  Stanley Schechter.

“The JVC is the true guardian for ethics and compliance. I’m very honored and thankful to receive this award and proud to have my name associated with Stanley Schechter who we also honor today,” Kaiser said.

In other business, Tiffany Stevens, JVC president and CEO, introduced its newest board chairperson, Jenny Luker, president of Platinum Guild International. Luker becomes only the second female chair at JVC since its founding in 1917.

In addition, Stevens discussed its latest efforts to help the jewelry navigate the ban on Russian-mined diamonds, the latest in a long list of unforeseeable events that have impacted the jewelry industry since 2000, and how having long-term relationships with national and state policymakers allows the JVC to support the industry.

“Coming into 2022, we had plans,” Stevens said. “What we didn’t know of course is that we would be dealing with once-in-a lifetime sanctions and other actions that impact our industry so dramatically. Figures, entities and individual products in our industry have been sanctioned in the US. and other countries.”

She continued, “JVC constantly invests in relationships with our colleagues in government (and) it’s because of these ongoing constant investments with our regulators and policymakers and those in government that we can bring our voice at the beginning of when policies are being written to make sure they reflect the value of our business. That we can get information quickly when things are changing and get that to you and we are very proud of the state of those relationships, particularly in such a crucial moment. We’re willing to make this investment in time and energy because of you, the members of JVC and your ongoing investment in us.”