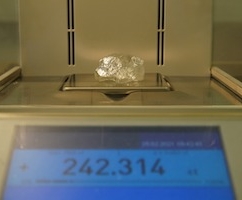 Moscow, Russia—Alrosa Group has announced the results of tender sales of the special-size diamonds in its Jubilee Auction #100.

Under Russian law, diamonds weighing 10.8 carats or more—called special-size diamonds—must be sold at international auctions only. Alrosa hosted the first such auction in Moscow in 2003. Its 100thsuch auction, this spring, was recently concluded with a round of high quality rough diamond sales in various locations around the world.

In addition to the Jubilee Auction #100 where three notable diamonds weighing 242.31 carats, 190.74 carats, and 136.21 carats were tendered, the Group hosted two more auctions of special-size diamonds. One was digital with an additional option of on-site viewings in Dubai, and the other, in a traditional format, took place in Antwerp, Belgium.

“We are glad to see such a keen buyers’ interest to the exceptional mix of rough diamonds that we decided to tender [at] the 100th special-size diamond auction in ALROSA history,” says ALROSA deputy CEO Evgeny Agureev. “Among with the Jubilee auction itself with a trio of exceptionally large lots, we hosted a classical auction of special-size diamonds in Antwerp as well as a digital auction with viewings in Dubai as an option. This allowed us to ensure that as many clients as possible would have an access to the goods despite the traveling restrictions that are still in place.”

The auctions’ success is evidence that diamond industry has passed through the pandemic’s unprecedented challenges and proved its resilience, he added.

Proceeds from three auctions totaled $23.9 million, which includes proceeds of $7.7 million from the Jubilee Auction #100. After a tightly contested bidding race that lasted almost seven hours, three companies from India and UAE placed the winning bids.

Next article:
Famed Celebrity Jeweler Martin Katz To Expand Into Other Lifestyle Categories