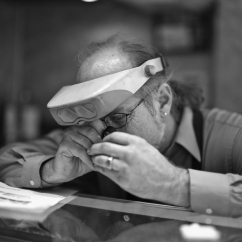 Manitou, CO—For jewelers Lane and L’Aura Williams, growth happened organically. The two were recently profiled in an article in Colorado Springs Business Journal, about how their business, Lane Mitchell Jewelers, grew out of “doors that opened to us.”

Theirs is the classic industry story of a talented designer goldsmith and a sharp business mind coming together. Master goldsmith Lane Mitchell Williams has been a jeweler for 47 years, apprenticing and working for others before opening his first store in 2001. He began dating L’Aura in 2006 and she joined the business in 2007.

“Lane is a right brain [creative]; I am a left brain [analytical], and together we make a whole brain,” she told the paper.

Two years after she joined the business, the couple hired their first employee and moved into a larger space. Eventually that became 13 employees—including all four of their children—and a second location. Now they're ready to consolidate back into one location.

In the article, L’Aura Williams talks to CSBJ author Jeanne Davant about how it all happened, particularly growing a business during the Great Recession.

“We were just walking through the doors that opened,” she said, citing how the couple bought gold off the street, restored and repaired it, and sold it on eBay. That led to a local antiques dealer offering rental space in his store, which led to taking over the whole store in Colorado Springs, then buying a building and opening a second store in Manitou Springs. The couple also were very early adopters to online selling.

The couple continually tweaked their business model, including a long-range plan to consolidate the two stores back into one in the building they owned. Originally it was about having greater efficiency with everyone and everything in one place—and not paying rent downtown—but the Colorado Springs location had grown less desirable as well. The COVID-19 pandemic hastened that plan, and now they’re fully ensconced in the Manitou Springs store. They’ve since implemented an integrated point-of-sale system that immediately reconciles both in-store and online inventory as soon as something is sold, no matter what channel. The store website also offers immediate live chat.

They’ve also benefited from foot traffic in a pedestrian-friendly town and are starting to see second-generation customers. Revenues have grown steadily and the jeweler continues to adapt and pivot as business changes.