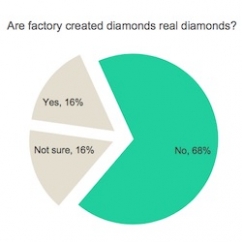 New York, NY—Are they or aren't they? New survey results released Monday by the Diamond Producers Association (DPA) and The Harris Poll reveal that Americans feel that diamonds created in a factory are not “real” diamonds. 68% of respondents made such a distinction, with a significant majority saying synthetic or lab-grown diamonds are not real because they are not “natural,” “from the earth,” or because they are made by people. Only 16% of respondents said a diamond created in a factory is “real.” The study was conducted May 3-7 and surveyed a nationally representative sample of 2,011 consumers age 18+.

The new survey adds to the DPA’s much larger body of research, which aims to help the industry better understand consumers, trends and perceptions around diamonds. Unfortunately, it also adds to the industry’s confusion and division about the subject, with contradictory studies touting growing acceptance of man-made diamonds, and even the 16% of DPA study respondents who do consider a lab-grown diamond to be real said that having the same chemical makeup—compressed carbon formed under pressure—and looking the same as natural diamonds qualifies it as real.

Harris/DPA survey participants were asked, “Factories exist where, over the course of two weeks, diamonds are created that have the same physical and chemical properties as a natural diamond. Do you consider this type of diamond to be a real diamond?”

Respondents described “real” diamonds as “genuine,” “natural,” and “authentic.” When asked to describe a diamond not real, many used words like “man-made,” “synthetic,” “artificial” and “imitation.”

Source for both charts, here and top of page: Diamond Producers Association

“Diamonds are billion-year-old treasures of the Earth that came to us very, very slowly, which makes them uniquely meaningful in today’s on-demand world,” said DPA CEO Jean-Marc Lieberherr. “At a time when everything ‘artificial’ aims to compete with, and replace, ‘natural’ and ‘real,’ these results show consumers care about the inherent value, authenticity and symbolism that a diamond carries.

Separately, on behalf of DPA, survey firm 360 Market Reach conducts a national survey on “Diamond Attitudes and Usage” every six months, among U.S. Millennials who have acquired a diamond over the prior 24 months. Among these consumers, consideration of synthetic diamonds has remained stable over the last year, at 70 percent. However, since the last survey, a diminishing number of consumers would consider synthetic diamonds for milestones such as engagements, birthdays or the birth of a child, “pointing to a growing consumer realization that synthetic diamonds lack value,” said Lieberherr.

Related: Mined or Manmade? What Do Millennials Really Want In A Diamond?

“These results are important, and confirm what our consumers tell us: ‘Real Matters’—a perspective shared across generations and one that cannot be replicated in a matter of weeks. The makers of synthetic diamonds calling their products ‘real’ not only goes against the spirit of existing terminology standards, in opposition of consumer belief, but they are also creating confusion in the marketplace.”

The implications of both studies, in combination with independent diamond industry analyst Paul Ziminsky’s latest findings that prices of laboratory-grown diamonds have been falling rapidly is clear, says Lieberherr. “Simply put, [laboratory-grown diamonds] will never deliver on the promise of a real diamond precisely because they are not natural. And now we are witnessing their separation from diamonds in the marketplace as they find their inevitable place in the fashion jewelry market.”

London, UK—Global consumer demand for diamond jewelry hit a new all-time high in 2017, climbing to US $82 billion, a 2% year-on-year increase, says the latest data published by De Beers Group. Americans and women combined to drive the majority of the growth in sales.

Consumer demand in Mainland China, the world’s second largest consumer market for diamond jewellery, also returned to positive growth in 2017, reflecting the trend of the broader luxury goods sector. Demand increased 3% in local currency and 1% in US dollars, totaling US $10 billion. There also was a revival in the Hong Kong market in the second half of 2017, driven by both stronger local demand as well as a resurgence of Mainland visitor shopping.

Bruce Cleaver, CEO, De Beers Group, said: “People around the world are spending more on diamond jewelry than ever before and it’s encouraging to see consumers in the U.S., the world’s largest and most mature market, leading the way. While new designs and brand concepts played a key role in catching the consumer’s eye, it’s the timeless natural beauty, uniqueness and enduring value of diamonds that continues to resonate with people when looking to celebrate life’s special moments.”

Demand for diamond jewelry in the other main consumer markets of India, Japan, and the Gulf states saw low single digit declines in US dollar terms, affected by a range of macro-economic factors and regulatory and exchange rate impacts. Consumer demand in other diamond jewelry markets globally increased overall.

The outlook for 2018 demand growth remains positive in most of the main diamond consuming countries, based on solid world economic prospects, positive consumer sentiment, and continued investment from the diamond industry in category marketing.

Shanghai, China—Forevermark announces the opening of Libert’aime by Forevermark, a new flagship store at HKRI Taikoo Hui in Shanghai. The opening comes as the brand celebrates its 10-year anniversary in the country and marks the 1000th Forevermark store in China, but is unique in launching a new retail concept that targets self-purchasing women and merges online and offline platforms to create an exciting new Forevermark consumer experience. 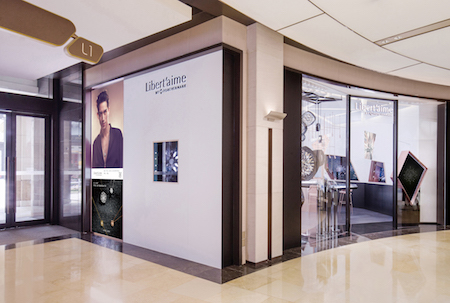 Exterior of the flagship store.

Created to celebrate the spirit of a new generation of women who are strong, unique, and authentic, Libert’aime by Forevermark offers a diamond jewelry range designed with a young, fashion-forward self-purchasing consumer in mind. It is designed to appeal to the 420 million Millennials in China, though an omnichannel model that offers a contemporary, highly interactive and engaging consumer experience that combines the Libert’aime by Forevermark flagship store, online platforms, and the launch of a WeChat store on China’s leading social media platform.

The physical store includes a number of innovative, digital experiences, including a 3D diamond wall and a ‘Magic Mirror’ where consumers can instantly share their favorite pieces with friends and family. In addition, it includes a ‘Diamond Bar’ featuring everyday diamond jewelry, and a ‘Spectacular Diamonds’ area containing fancy-cut and multi-diamond pieces. 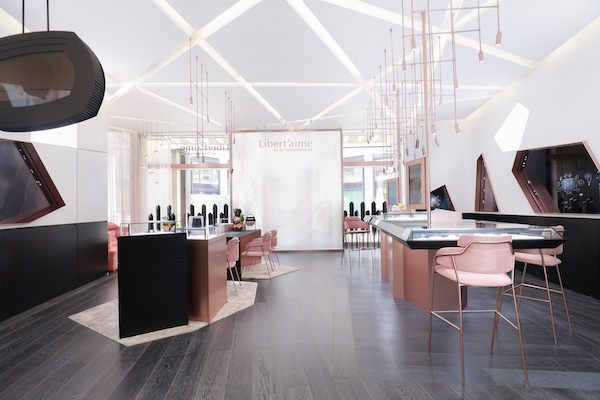 Forevermark CEO Stephen Lussier said, “We are delighted to be launching an exciting new retail concept in China, which brings together an innovative in-store offering with online and social channels to provide customers with a highly engaging and personalized buying experience. We recognize that our consumer continues to evolve and, with Libert’aime by Forevermark, we are thrilled to be offering a diamond jewelry range that has been designed with a younger, more fashion-forward consumer in mind, who might just be starting their diamond journey.” 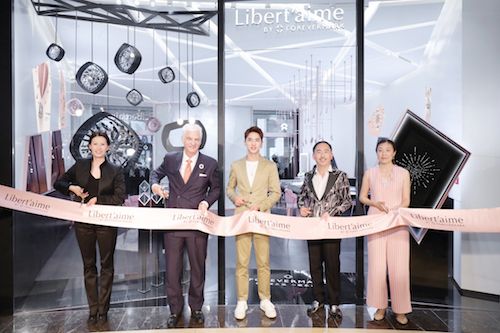 The brand still will continue to focus on its classic bridal and non-bridal collections with its retail partners, reassures Lussier. The new Libert’aime by Forevermark is a complementary offer to excite Millennials, he said.

Libert’aime by Forevermark will also include a new collection called LE LIGHT designed by Timmy Xu Weizhou, a rising star in China’s acting and music scene.

Moscow, Russia—ALROSA, the major Russian diamond mining company, has reopened its representative office in New York, and for the first time in two years held an auction there for the sale of special-size rough diamonds weighing over 10.8 carats.

The auction was held from April 23 to May 11; 50 companies from world’s largest diamond trading centers (including seven U.S. firms) took part in it. The company sold 63 lots; a total weight of 1040 carats, for USD $10.38 million.

“We are glad to reopen ALROSA’s office in New York and now are forming its team. The results of the last auction show strong interest from American diamond manufacturers,” said Evgeny Agureev, director of ALROSA’s New York office. Another auction will be held in New York in October.

ALROSA originally opened a New York office in 2006, but closed it in 2016 for organizational reasons. Its other global offices are in Antwerp, Hong Kong, Dubai, Ramat Gan, and Mumbai.

Next article:
Celebrity News: Royal Wedding Jewels; On The Red Carpet In Cannes And The Billboard Music Awards