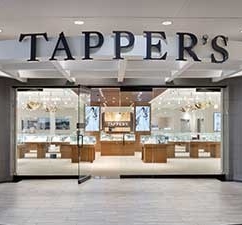 West Bloomfield, MI—Tapper’s Jewelry is ready to build a new, permanent freestanding location. The jeweler, which currently has three locations in the suburbs of Detroit, submitted plans to construct an 8,200 square-foot store on the 1.16-acre site of a former Big Boy restaurant in Novi, MI. The new store will replace its location in Twelve Oaks Mall in Novi, MI. Image: Tapper's flagship location in the Orchard Mall in West Bloomfield, MI.

Company president Mark Tapper, son of founder Howard Tapper, told C&G Newspapers the site was too good to pass up: “We just felt like this was a once-in-a-generation opportunity to acquire a hard corner on the fabulous Haggerty (Road) corridor between Six and Eight Mile Roads. Not very often does a piece of property like this, with sightlines from (Interstate) 275 and such great access and visibility, come about. When we had the opportunity, we just jumped on it.”

This isn’t the first time Tapper’s has fortuitously jumped on a great location. Founder Howard Tapper was working for another local jeweler when he spotted the perfect location for a jewelry store. Tapper, who always dreamed of owning his own store, sketched out the design on a scrap piece of paper. The square footage was modest, but the space had potential and rent wasn’t cheap. After borrowing what he could from family members, Tapper—who was newly married with a baby on the way—sold his car to raise the rest of the capital needed to open the store.

After hours of work renovating the store—there was no budget for interior designers—and installing inventory on credit, the new store was ready. There was no money to hire staff, either, so together with his wife, Susan, and his mother-in-law, Trudy, Howard opened Tapper’s Jewelry on May 7, 1977. The original sketch, now framed, holds a place of honor on the wall of the company's headquarters.

Success came quickly. The first day of business they managed to sell enough to pay the first month’s rent. In 1994, the original location gave way to Tappers’ current flagship store in the Orchard Mall in West Bloomfield, MI. 13 years later, in 2007, Tapper’s expanded to two stores with the opening of its Twelve Oaks Mall location. Then in 2010, Howard Tapper again jumped on an unprecedented opportunity to take a prominent space in the tony Somerset Collection in Troy, MI for the company's third store. The mall had lost some tenants during the 2008-2009 recession, giving Tapper the opportunity to move into a prime space there.

Tapper's Twelve Oaks Mall store, the second of its three stores, will be replaced with a new freestanding store by the end of 2022.

Plans for the new freestanding store include a 1500-square foot Rolex boutique, the second such in Michigan. The remainder of the building will house the jeweler’s other brands and products, including a 350-square foot David Yurman section.

The Novi Planning Commission unanimously approved a preliminary site plan. Mark Tapper told the paper a final site plan should be submitted for review soon, with the goal of demolishing the current structure and breaking ground for the new store in October.

“We’re hoping it’s really a 12-month build from there, so it would be our intent to be operating before Christmas of 2022,” Tapper said.

Next article:
How You Could Get In Trouble For Promoting Jewelry As ‘Made In The USA’