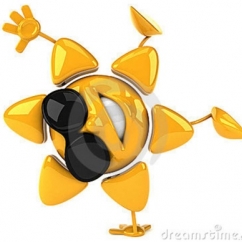 Merrick, NY—The champagne has been popped, the confetti has fallen, and the calendar page has turned. The New Year has begun and the 2013 holiday season now is history.

For luxury jewelers, it was a very good season indeed. While the holiday season for general retail was tepid at best, Centurion’s exclusive spot-check survey of luxury jewelers shows more than three fourths of respondents (77.3%) posted sales gains over last year’s figures. Most significantly, breaking the figures down, fully half of all respondents had major gains of 10% or more over last year’s sales. 18.2% saw gains between 6% and 10%, and 9.1% saw more modest gains between 1% and 5%. An equal percentage (9.1%) stayed even with last year, while 13.6% of respondents had a tougher year, with sales declining anywhere from 6% to more than 10%.

For jewelers across all categories, including non-luxury stores, National Jeweler reported a fairly solid season too. So did JCK and Rapaport. 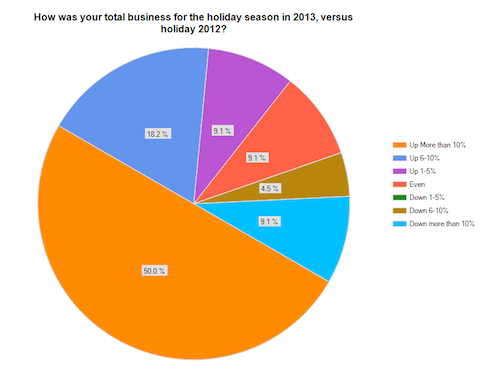 Half of all respondents to Centurion's exclusive survey of luxury jewelers said their total holiday sales jumped 10% or more over 2012 figures (orange slice). 18.2% were up between 6% and 10% (blue slice), and 9.1% were up between 1% and 5% (purple slice.) Another 9.1% stayed even (salmon slice), while 13.6% experienced sales declines (aqua and brown slices).

But in the broader retail picture, this wasn’t a very happy holiday, with an overall sales gain of just 2.3% over last year, according to data from MasterCard. Analysts blamed the usual factors: a shortened season, the ongoing sluggish economy with limited income growth, and no real must-have item for the season. But across the board, fine jewelry was the one bright spot in an overall lackluster season. In an article earlier this week in Women’s Wear Daily, Michael Gould, chairman and CEO of Bloomingdale’s, said “The luxury business has been phenomenal, upscale businesses have been good, cold weather categories have been terrific and I feel very good about fine jewelry.”

And Sarah Quinlan, senior vice president of Market Insights for MasterCard Advisors, told WWD that jewelry led all gift-related categories with a high-single-digit increase. She told the paper the surge in jewelry sales and is related to a decline in adult apparel sales: “Consumers aren’t replacing their apparel as often as they used to. I think that apparel’s performance came partially as a result of people buying things they saw as more of an investment. Consumers got a bit of a bonus earlier in the year when gas prices dropped 10 percent or so. They spent on jewelry first. That started in October and went through November and December, which tells you they weren’t just buying jewelry as a gift. If you didn’t buy a house or a new car, you bought some jewelry, and you did it as an investment.”

For general merchandise, the post-Christmas week is becoming more and more important, and this year especially, retailers were banking on it to pull the season into at least mediocre territory. It didn’t disappoint—traffic surged after Christmas, with shoppers taking advantage of deep discounts, redeeming gift cards and shopping for themselves. Even at luxury jewelry stores, self-purchasing matters: in the words of one Centurion survey respondent, “We had a strong week this week with those who came in and bought for themselves what they did not get for Christmas.”

Throughout the season, online sales surged while foot traffic dropped off; even jewelry was a strong performer online, according to digital analyst firm ComScore. The day after Christmas, shipping delays at both FedEx and UPS made headlines, while one U.S. Postal Service employee wryly told The Centurion, “We delivered everything on time, but nobody gave us any credit!”

What sold best. According to The Centurion’s research, luxury consumers were fairly evenly divided in terms of what they wanted to spend for jewelry gifts.

While one respondent commented, “high or low, forget the middle!” the overall results showed the middle was, in fact, where most of the strength lay. 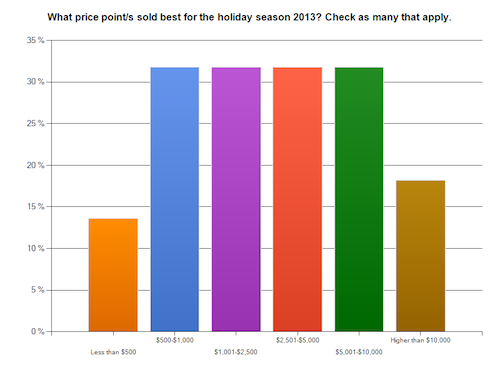 Centurion's spot-check survey of prestige jewelers found strength in the middle. Few reported low-end product as best-sellers (orange slice, left), and about 18% reported their strongest selling pieces were above $10,000, but most were somewhere in between. (Respondents were allowed to choose multiple answers).

The Centurion asked respondents to list their single biggest sale. Fully one-third of respondents listed a six-digit sale as their biggest; for example, one cited $379,000 Hearts On Fire diamond studs and another sold a $325,000 diamond ring. There were quite a few large estate sales and other diamond sales, and a few listed emeralds among their six-digit sellers.

Best-sellers in the five-digit price range were, not surprisingly, mostly diamonds and Rolex watches.

In terms of category, it was a diamond and designer Christmas. As usual, diamonds were the top-selling category for prestige jewelers. This includes all diamond jewelry, both bridal and fashion. 70% of respondents cited diamonds as their best-selling category; 45% cited designer or branded jewelry as their top-selling category. Designers and brands cited by name included David Yurman, Roberto Coin, Penny Preville, Marco Bicego, Lagos, Elizabeth Locke, Pamela Froman, Hearts On Fire, Spark, Vahan, Doves, and Charriol.

Marketing that worked. Centurion survey respondents were asked to identify the marketing efforts they felt best contributed to their success this season. Some jewelers cited a generic “traditional advertising” and some broke it out by channel, most notably TV. Taken together, this was the most popular response, but not far behind were Facebook, email marketing, and direct mail. Personal contact—phone calls or hand-written notes—was also very important, especially for jewelers who had successful trunk shows and special events.

The season and the year. “The wealthy spent big and early, everyone else waited till the last minute.” This comment by one Centurion respondent summed up much of how the season went for luxury jewelers. Key themes were later and later business, and higher tickets. Some jewelers reported lower foot traffic but bigger ticket spending, resulting in overall positive gains; others reported both more shoppers and bigger ticket sales. The early timing of Hanukkah resulted in a barbell-shape season for those jewelers with a strong Jewish clientele—lots of shopping early, then a lull, then the usual last-minute Christmas rush.

For luxury jewelers, 2013 was a good one overall. 71% of respondents said their 2013 total year business grew over 2012—which was a strong year as well. 38% of respondents reported significant increases; 33% reported more moderate increases. 20% reported the year was flat with 2012, and 15% reported a decline in total business for the year.

Previous article:
How Will Luxury Perform In 2014?