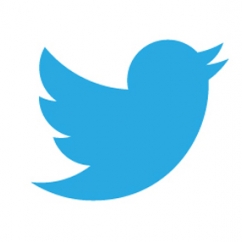 How? By encouraging the customer to come closer and find out more, according to Luxury Society. And because it’s limited to 150 characters, it forces users to keep their content snappy and stimulating.

Luxury Society tapped Digital Luxury Group to find out which luxury jewelry and watch brands are doing the best job of using Twitter to engage their customers and fans.

Not surprisingly, Tiffany & Co. was the runaway favorite with more than 1.4 million followers. The brand has been a perennial leader in digital marketing in the jewelry and watch space; so much so that the gap between its followers and those of its next closest rivals, Bvlgari and Cartier, is more than double.

Blue Nile—the arch nemesis of many an independent jeweler—rounds out the list in the #10 slot, but watch its fan engagement figures: those are more than four times what Tiffany boasts. 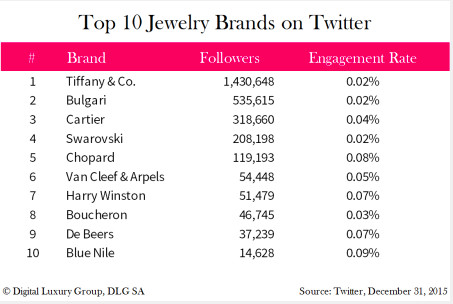 Watch brands, meanwhile, show lower penetration all around. Bvlgari is the leading watch brand on Twitter, but its 535,615 followers kept it as distant second for jewelry. Watch brand engagement lags that of jewelry brands, but Chopard and IWC show engagement rates only slightly below that of Blue Nile. 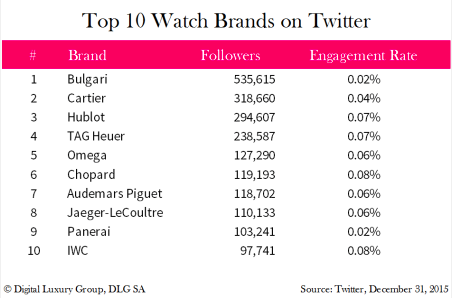 “Twitter, although suffering from somewhat of an identity crisis, is a great medium for luxury brands to share relevant and timely news, particularly during key events and when fans want, or need, real-time bursts of information. Chanel is an excellent example of this, ensuring they Tweet before, during and after key events, as they did with 2015’s Mademoiselle Privé exhibition, and posting highly shareable and video and photo content as they are doing during this year’s Paris Fashion Week,” says Digital Luxury Group marketing and communications manager Genna Meredith.

Indeed, Twitter is offering a suite of emerging products for retailers, most notably embedding videos which, from an advertising reach point of view, have great potential for Twitter as part of a brand’s digital communications plan, adds Meredith.