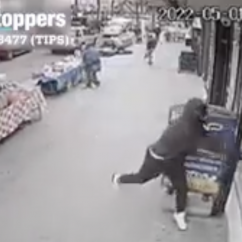 New York, NY--A crew of thieves bashed into the front of a Bronx jewelry store with a sledgehammer in broad daylight.

According to a news report, the incident took place Sunday afternoon when a man in a black hoodie rushed to the window of M & NP Jewelers on White Plains Rd. in the Pelham Parkway section with a sledgehammer.

The report added that the suspect bashed the store window amid the screams of store workers from inside the shop. The thief then grabbed the jewelry and passed it to an accomplice who shoved it in a bag.

"All of a sudden we hear a boom, a loud boom. The last thing I had in my mind was that we were gonna get robbed," store employee Yailin Reyes said, as per the report. "My first instinct was to close the gate. And while I was closing the gate, the guy got stuck between the glass and the gate, and I was like 'Oh my god am I gonna chop him in half?"

The thieves stole ten gold chains and five gold pendants amounting to $20,000 in the smash and grab incident.

Police said the incident is part of a citywide jewelry store robbery pattern over the last few months. The report added that at least 18 stores had been hit in recent months, with robbers stealing goods worth more than $247,000.

Anyone with information on the incident is requested to call Crime Stoppers at (800) 577-TIPS.

Read more and watch the video of the incident in the news report.