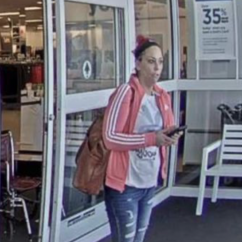 Perrysburg, OH--Two suspects stole tens of thousands of dollars worth of jewelry from a department store on April 16.

Detective Chris Klewer who's investigating the incident, told ABC that a man and a woman walked into the store Saturday afternoon and stole diamond jewelry worth $56,000.

“You can tell they know what they are doing,” said Klewer, according to the report. “They find the jewelry case and look around to make sure no one is watching.”

The report states that the two suspects — as seen in the surveillance footage — lingered around a glass jewelry case for several minutes before one of them tried to lift the glass top. The woman then stole diamonds from several trays and kept them in her purse. The two suspects then walked out of the store.

Klewer told the outlet that such theft incidents were becoming more common. “It’s a crime of opportunity,” he said, as per the report. “The penalties for theft right now are not that high, so people know that they can get away with it.”

The investigation is ongoing. Anyone with information about the incident is asked to contact Perrysburg Township Police at 419-874-3551.