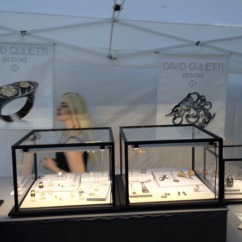 Berkeley, CA--Rockstars wear gleaming jewelry, and while it's all flashy under the bright lights on the stage, there's much work behind making such pieces. Not many jewelers would know the business of catering to high-profile rockstars than David Giulietti.

Giulietti's jewelry store opened early in the pandemic — notes a news report — and had much to catch up on.  “It was challenging at first, but it’s been picking up steadily ever since,” Giulietti said in the news report.

Giulietti initially thought making jewelry was "silly," but the idea crept up on him when he moved to California from his native of Schenectady in New York in 1992. He took a jewelry-making course and was soon working as an engraver for high-end jewelry stores. He even sold items at high-end craft fairs before opening his own store.

From there, Giulietti has made jewelry for John Mayer, Katy Perry, Jackson Browne and Dan Auerbach of The Black Keys.

The report notes that Giulietti's jewelry is known for its fine detail. “The engraved surface has more of a handmade feel,” he said in the report. “It makes it richer and sweeter and vibrates with old-world magic.”

More on Giulietti's jewelry in this report.