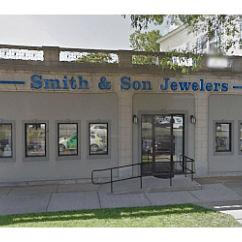 The three—Smith & Son Jewelers, Sayegh Jewelers, and Furnari Jewelers—all confirmed what the industry already knew: wedding ceremonies might have been postponed or scaled back, but love hasn’t been canceled. Quite the contrary: the pandemic drove home to many people what matters most in life. Not surprisingly, it’s relationships, and with it, a way to mark the importance of the milestone or relationship with a meaningful talisman like a diamond.

Smith & Son, which traces its roots back to 1918, has two stores: one in Enfield, CT as well as Springfield, MA, and offers both ready-made and custom engagement rings. The jeweler also recently was rated one of the three best jewelers in Springfield by the website Three Best Rated.

“People were realizing what was going on in the world and maybe that life is short and to not put everything off in life,” she said.

Engagement rings are selling even better this year, she told the paper.

“It feels good. It really does. It’s nice to see people’s smiles again and just nice to be with our customers. We have a great customer base and family generations that come in, because we’re fourth generation as well, so it’s just really nice to see all of that,” she said.

Sayegh Jewelers, with locations in Chicopee and East Longmeadow, MA, is the culmination of generations of jewelry expertise. Owner and head jeweler James Sayegh immigrated from Lebanon in 1986 and put his goldsmithing skills to work by opening a small repair shop in Chicopee, MA. In 1992 James and George Sayegh opened a retail shop in East Longmeadow, adding a variety of well-known jewelry and watch lines.

Owner Eddy Sayegh told The Reminder that both stores are very busy with both repairs and custom orders, and engagement and wedding ring sales are climbing every year.

Meanwhile, Joe Furnari, owner of Furnari Jewelers, with three stores in Holyoke, Chicopee, and Enfield, CT, said 2021 has been one of the best years ever. Furnari is the second generation; his father Anthony founded the company 40 years ago after a stint as a retail manager for Zales. His son Joe followed in his father’s footsteps, first working for Zales himself and then opening a second Furnari location in Enfield in 2012. Joe’s observations from The Reminder:

“It feels great. Not just for business, but for everyday life aspects. Just to get back to the way things were,” said Furnari. “I think there’s a deeper appreciation for it now which is fantastic. It’s all the small things people appreciate, and I think it’s strengthened a lot of people’s relationships, too, in every aspect, not just with loved ones but I think people appreciate their children more, their parents, their friends...it’s a deeper appreciation, because for a while we didn’t have it. Sometimes you don’t know what you’ve got until it’s gone, but now it’s back so you appreciate it.”