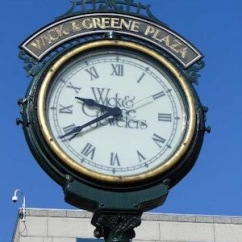 That’s what at least one Asheville resident wanted to know when she reached out to WLOS-TV’s “Ask 13.” The street clock (image), a vintage 1926 Seth Thomas that’s one of Asheville’s most recognizable landmarks, disappeared from its four-decade location in June.

Spicer Greene Jewelers, an AGS and Preferred Jewelers International store, traces its roots to 1926. Although the clock is the same age as the jeweler, it wouldn’t make an appearance for more than a half-century later.

The business was founded when E.O. Wick, a former jeweler for Tiffany & Co., moved to Asheville from New York City. In 1942, he brought in an apprentice, Paul Greene, who with his wife Lucia became a full partner in the business in 1953, changing the name to Wick and Greene. In 1975, Paul and Lucia Greene’s son, Michael, joined the family business. Michael married Eva Buckner in 1981 and she came into the business as well. Around the same time, the Greenes renovated a 1920s Art Deco building that used to be an Exxon gas station and moved the store into it. Fittingly, it was then that the Deco-era Seth Thomas clock was installed outside the store.

“I was wondering why the old Wick & Greene clock was taken down and if it will be coming back? The corner of Otis & Patton looks very empty without it!” a viewer named Mary wrote to Ask 13.

Not to worry, the clock is coming back, says Eva-Michelle Spicer, the third generation of Greenes to helm the business. Spicer, the daughter of Michael and Eva Greene, became a partner in the business in 2014 along with her husband, Elliott Spicer, a jeweler from Canada whom she met at GIA. The couple took it over in 2016, renaming it Spicer Greene and renovating and tweaking the store to provide an experience tailored to 21st century shoppers.

Spicer has fond memories of her grandfather’s clock, she told WLOS. Indeed, the outline of the clock forms the background of the Spicer Greene logo. 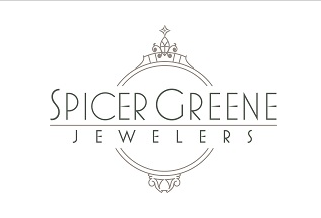 "I have really fond memories as a little girl, of winding it with my granddad. So, now it's my privilege to get to wind it twice a week," Spicer said. "But there's a lot of moving parts inside a clock or a watch. So, it needed some TLC for sure."

The clock is being restored inside and out, she told the station. What residents will notice when the clock comes back later this year or early next year is that it will have new gold leaf and powder coating. But the inside workings will be serviced as well.

The 91-year-old clock’s restoration is in perfect timing to coincide with the opening of Spicer Greene’s Watches on Wall Street Boutique, which offers new watches from brands like Breitling, Seiko, Hamilton and Shinola, and rare and hard-to-find pre-owned watches from luxury brands like Rolex, Franck Mueller, Tag Heuer, Omega, Baume & Mercier, Cartier, Jaeger LeCoultre, and more.

The Art Deco-era former gas station, above, that Wick and Greene Jewelers transformed into a jewelry store is still the site of Spicer Greene Jewelers, below.