New York, NY—At Bloomberg’s The Year Ahead: Luxury conference, Tiffany CEO Alessandro Bogliolo, in a conversation with Bloomberg Businessweek co-anchor Carol Massar, shared some of his insights into what sets a luxury retailer apart and how Tiffany’s early innovations drove today’s brand promise.

Charles Louis Tiffany started his business in 1837 in New York, with the first store in front of City Hall, explained Bogliolo. “One point of difference was to bring the most beautiful jewelry to a city that at time was an emerging economy. Another was that he was a visionary to say, ‘I will bring refinement to people working so hard to make money,’ and a third was to have a fixed price and display it and that’s that.”

He also touched why sustainability is now a pillar of Tiffany’s brand promise, plus some of the advantages of being part of a megabrand—but why that’s also not necessary to thrive.

“What’s crucial is that when you lead a brand like ours with over 100 years of history, you have to look at all the elements. Customers don’t care about shareholders, they care about the brand, the product, sustainability, beauty, et cetera,” said Bogolglio, pointing out that only a handful of brands are really megabrands. While there are synergies that being part of a large group like LVMH brings—freeing up brand personnel to focus on brand development—there also are top luxury names like Chanel and Hermès that have been successful without being part of a conglomerate.

Tiffany has had its share of struggles lately. Its decision to jack up prices of its affordable sterling silver collections resulted in a corresponding plummet in sales, while a decline in tourism and lukewarm receptions to new product collections also impacted its bottom line. But one area where the retailer still shines is in its focus on sustainability. In that regard, it is far ahead and a true thought leader in the jewelry industry, and that’s something that may help revitalize the brand with Millennials.

“Millennials have a different approach when they buy,” said Bogliolo. “Boomers were all about a famous brand and a beautiful product, no other questions. Millennials want to know why Tiffany is famous, what does it stand for, why should they go to Tiffany, et cetera. Yes, the product is beautiful—but is it beautiful inside?”

Massar concurred. “I have a 16-year-old. She got her first Tiffany present—a rattle—when she was born. She’s had lots of other Tiffany gifts and she loves them, but also is the first to flip a product over and see where it’s made. Was it made in China? In a sweatshop?”

If it’s Tiffany it won’t be made in a sweatshop, replied Bogliolo.

“My predecessor (Michael Kowalski) was very visionary to vertically integrate the company. We’re the only jewelry company to buy rough directly at the mine and cut and polish and do all the work ourselves.”

It’s a double advantage relevant for the Millennial consumer, he said. “[They say] ‘I got to Tiffany because I know [where the products come from].’ We can tell you where your diamond comes from. And we don’t only tell you, we certify it on a certificate. This is a must for younger generations!

“You know where the fish you buy comes from, Atlantic or Pacific, but you weren’t told where your diamond comes from? That’s unacceptable!”

[Responsible sourcing] was an obligation that Tiffany felt and it took 20 years of investments and skill building to have four or five different sites where Tiffany diamonds are cut and polished—and the working conditions in them are top notch, he said.

“It takes two years for a polisher to be trained before they’re capable to polish a Tiffany diamond.”

Massar asked if Tiffany focuses on sustainability because it’s the right thing to do or because customers demand it?

It’s not a chicken/egg kind of thing, responded Bogliolo. “It was a clear decision by Mike Kowalski that it was the right thing to do.  After the Blood Diamond movie, the industry went to non-conflict diamonds, but Mike Kowalski said non-conflict was not good enough. He said, ‘I want to make sure the diamond I sell you didn’t come from a country with infringement of human rights or child labor. I want to be sure the diamond is respected,’” he said.

But he also pointed out that the intense consumer interest in sustainability only began reaching its tipping point in the last year or so.

To watch the entire interview, click here or on the image below: 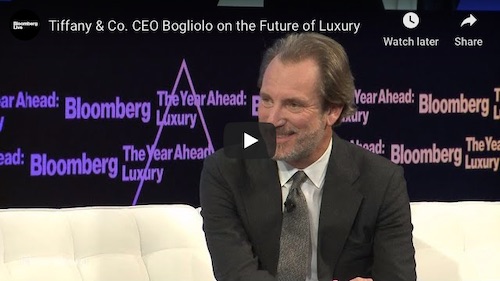