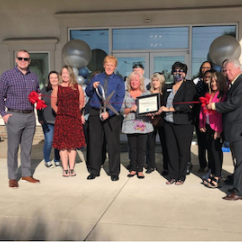 Lexington, SC—Traditions Fine Jewelers recently cut the ribbon on a new store in the former space of a jeweler its owners bought out. Image: Karamie Hallman for Coladaily.com

Coladaily.com reports that Traditions owners John McNeill and George Prout bought the assets to the former Jewelry Warehouse and revitalized the space it was in. Jewelry Warehouse’s owner, Scott Satterfield, is acting as a consultant to Traditions and in fact was the one wielding the scissors at last Monday’s ribbon-cutting ceremony.

Satterfield got lucky in that it’s not always easy for a jeweler to find a buyer for the business, say industry experts.

Satterfield told the paper that Traditions will have far more merchandise than the last few years of Jewelry Warehouse, and that the new owners are keeping many of his staff, as well as programs like loyalty points and gift cards, and allowing previous customers to use them in the new store.

“What he [new owners] did for me and for the staff, I could never thank enough other than make sure the store is good, profitable and that he looks at it and says, ‘I’m glad I did what I did,’” said Satterfield in the article, noting that his wife, who passed away from cancer in 2016, had managed his store's online presence and that his daughter has now stepped into that role for Traditions.

Next article:
New Digs For Hyde Park Jewelers In Arizona