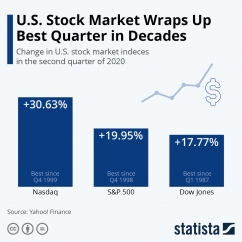 New York, NY—While coronavirus case numbers are spiking, forcing several U.S. states to roll back or stall their reopening plans, the U.S. stock market just finished its best quarter in more than two decades, continuing what many think of as a growing disconnect between financial markets and economic reality.

This chart from Statista.com shows each of the three major indices’ performance in Q2 2020, and lists the last quarter each saw the same level of growth. The recent growth was fueled by the largest stimulus package in history, (temporarily) receding case numbers, vaccine hopes and seemingly unshakeable optimism with respect to a swift recovery.

The Dow Jones, S&P 500 and Nasdaq all rallied through large parts of the past three months, ending the quarter up 17.77, 19.95 and 30.63 percent, respectively. While those are the biggest quarterly gains in more than two decades for each of the three indices, many experts are wary of what’s next for stock markets, especially given recent case numbers.

“As we begin Q3, only one of those tailwinds is currently in place: stimulus,” Tom Essaye, analyst and founder of The Sevens Report wrote in a research note quoted by CNBC. “That doesn’t mean we’ll see a correction, but be suspect of market rallies until we can add more forces supporting stocks, because we’re one stimulus disappointment away from an ugly day,” Essaye warns with respect to the weak foundation of the latest rally.

A robust stock market tends to bode well for luxury jewelers, and so far it's been positive. Figures from The Edge Retail Academy show jewelers tracking at 93% of sales year on year--much better than expected given the situation--and some jewelers told De Beers researchers they're capturing dollars from canceled vacations and seeing an uptick in engagement ring sales.

All that said, however, American consumers as a whole are feeling far from optimistic. A YouGov survey conducted in June shows nearly 60% of American consumers think the economy is getting worse. Slightly fewer than 18% feel it’s improving and 23% said they’re unsure or think it’s staying the same. Chart: Statista.com 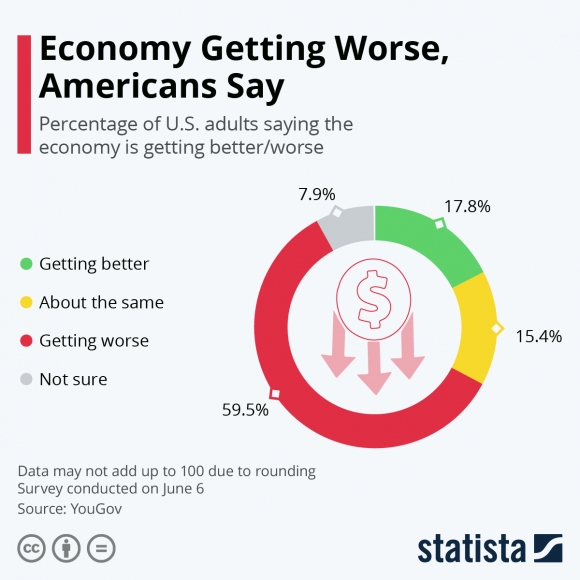