Asheville, NC—The last thing Tonya Marthaler planned to do with her life was become a jeweler. An Air Force veteran and registered nurse, Marthaler’s devout Christian upbringing and faith drove her to pursue a life of service, not luxury. But her husband, Andy—raised with the same ethos of faith and service—found a passion for jewelry in high school, while working for a local jeweler (Price’s Fine Jewelry) in his native Minnesota. Left: Andy and Tonya Marthaler

After attending GIA, moving to North Carolina, and working for other jewelers, Andy Marthaler finally realized his dream of owning his own store in 2010, when he opened Marthaler Jewelers. By 2013 the business had grown enough to need a larger store, and Tonya joined full time, directing the design of the new store in South Asheville and handling marketing and management.

But while many people might forget their roots after being immersed in high luxury every day, Andy and Tonya Marthaler did not. Tonya, who still uses her nurse’s training on a volunteer basis, was planning a mission trip to Uganda when her father asked, “Have you ever looked at Native American reservations?”

Though part Lumbee Indian herself, Marthaler had not. She was familiar with the Lumbee reservation in Pembroke, NC, but not with any other tribes. Native American history is barely mentioned in school history classes, if at all, she told The Centurion. “I didn’t learn that much about it, even being Native American myself. I had never heard of Wounded Knee till I read Bury My Heart At Wounded Knee. There’s so little information out there that’s truthful and accurate.”

When in doubt, Google.

After reading heartbreaking statistics about the Pine Ridge (Lakota) Reservation in South Dakota, Marthaler scrapped her mission to Africa and began her quest to serve by helping fellow Native Americans. Pine Ridge Reservation, located about 120 miles from Rapid City, (the closest town of size) is the poorest county in the United States:

“It would have cost $3,600 to go to Africa. I thought about how many tampons you can buy with that money and I canceled my trip,” said Marthaler. Things that most people take for granted, such buying a bulk pack of toothbrushes, are unheard of at Pine Ridge, where many people can’t afford even one toothbrush or enough food to feed the family. 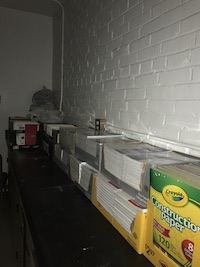 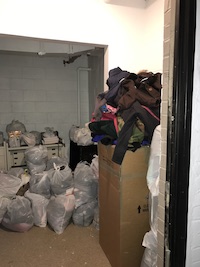 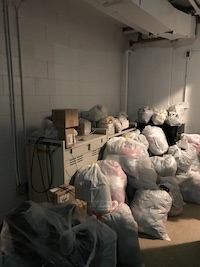 Above: Marthaler said, "This one of the schools that we helped while we were there. We brought a trailer load of supplies and clothes. We barely got pictures before word got out there were supplies and the teachers were filing in to get them and the people were coming to get some winter clothes." A new sewing program at the school, meanwhile, gives young women both a chance to learn a skill and a way to be occupied after school. Outside of a few sports, Marthaler says there is nothing available for students to do after school, and with 100% of students on the free or reduced-price lunch program, the meal is often the only one they get for the day. 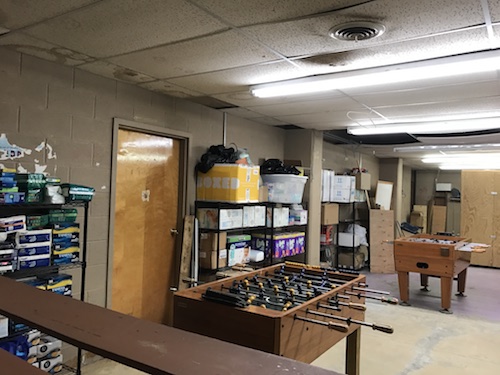 Above, the BEAR Cave, and below, its founders Tiny (standing) and Eileen (seated) with Andy and Tonya Marthaler and a student. Tiny started the BEAR Cave (Be Excited About Reading) but she and Eileen joined forces when Sweetgrass Suicide Prevention closed. It had been the only suicide prevention and postvention resource on Pine Ridge, where teen suicide rates are 150% higher than the national average. Marthaler says the BEAR Cave room had three raw sewage leaks in the past year. Tiny and Eileen keep microwaveable food and sanitary supplies for the kids in the BEAR Cave, and also participate in the wakes for teenagers to make sure that surviving teens have someone to talk to during the grief process.

"They take food to kids who tell them there is no food in the house. They give out sanitary supplies. They set up a chili dinner and had everyone come and eat and go through the clothes that we and other people donated to get winter clothes," says Tonya. She and Andy also donated the shelves along with the food and sanitary products on them. "I call them Women Warriors." 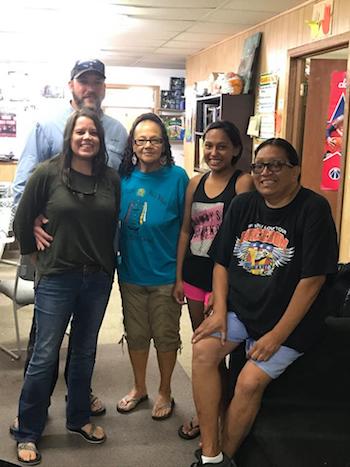 Life-changing. When you sell exquisite luxury jewelry—from the likes of brands such as Oscar Heyman, JB Star, Syna, Fana, and others—meeting someone that can’t afford a toothbrush or a box of tampons is a life-changing experience, says Marthaler.

“Andy and I knew that we wanted Marthaler Jewelers to be about giving back.  We truly never thought it would be what it is, but we always knew we wanted to give back.”

It led Tonya to establish the Unbroken Circle Project last year, an organization whose mission is partnering for success in life and education for Native American children. The organization works in partnership with Helps Ministries, which provides the 501(c)3 fiscal support and frees Marthaler up to focus on getting aid to the reservation. 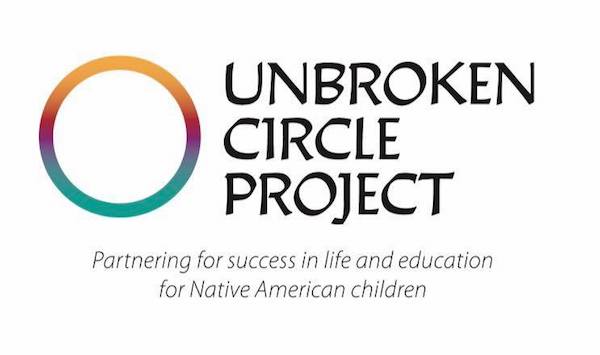 “When someone comes into the store and asks for a donation [to a cause], that’s one thing, but to be able to partner with schools and such, that’s entirely another,” she says.

There is a tremendous disconnect between selling luxury and trying to alleviate poverty.

“I’ll be honest, it is hard,” admits Marthaler. “When you know someone has resources that cannot be defined and there is no limit to them, that they could buy anything in here—or just buy the whole store if they wanted—you think how much could be done with just a little of that money.”

“At the same time we could not do what we have done if not for the success of the store,” she says after a pause. “We are amazed at the amount our customers have embraced us. We have gotten thousand dollar checks from our customers. We had a gentleman come in and just say, ‘I want to give you this.’

“I need the money, and I don’t know how to ask, but he was so gracious. He and others have come in before our last trip and said, ‘here, use this for school supplies or whatever.’ We are so fortunate that the customers are willing to share our passion for Lakota.”

Marthaler’s is working on its first Unbroken Circle benefit event in the store, which will be May 17. One of the store’s media partners will sponsor the event, with three nearby neighborhoods participating, and hopefully other advertisers will contribute raffle items and guests will contribute food or feminine sanitary supplies. 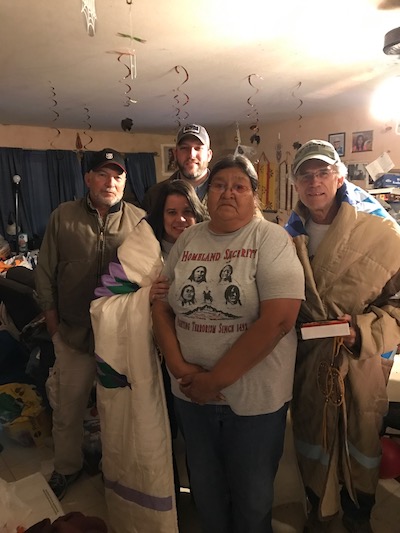 "Andy and I after an Indian taco dinner with the grandmas that our family supports. We were deeply humbled when they gave us these beautiful star quilts to say thank you. We tried to explain that we don't do what we do for things and they said, 'No one has ever helped us like this.' Receiving a star quilt is a great honor in the Lakota culture. We are still processing the significance of this moment," she told The Centurion.

Misconceptions. The biggest hurdle Marthaler has had to face are people who believe the U.S. government or reservation casinos support the Native Americans. Nothing could be farther from the truth, says Marthaler.

“No. They don’t get government money. They get a food box of canned meat or powdered eggs that most people would not eat, at least willingly,” she said wryly. “The assistance is not there.” 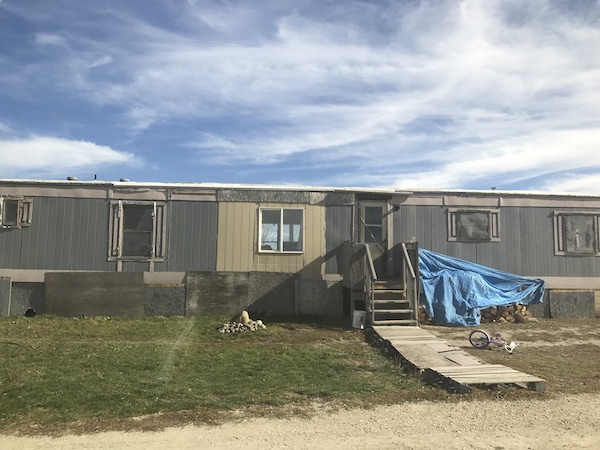 This trailer, typical of the homes on the Pine Ridge Reservation, houses several families. Below, the entryway, left, and hallway, right. Most of the houses on the reservation are in this condition or worse, says Marthaler. Below bottom, an outhouse behind the trailer that one of the residents built. It's a source of pride, says Marthaler bluntly, because it's nicer than the house. Outhouses are common; indoor plumbing is scarce on the reservation. 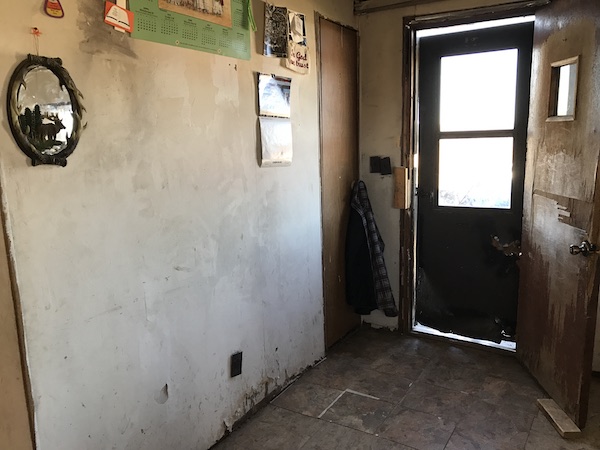 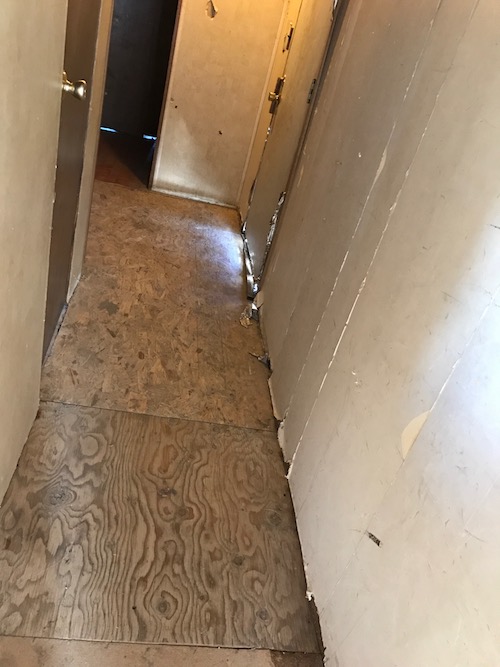 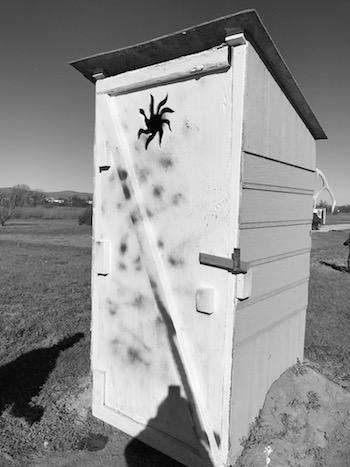 But what is there is a tremendous amount of prejudice, she says. “Young kids from the reservation went to a football game in Rapid City and grown adults poured beer on their heads and threw the beer cans at them!

“Even this past Christmas, when one team from the reservation was going to play a high school homecoming football game in Sturgis, students from the school painted a swastika and yelled ‘Go back to the reservation!’ So you can’t just say ‘leave the reservation and go get job.’ It doesn’t work that way.”

Even volunteers run up against the hatred. For instance, the manager of the closest Walmart to the reservation got nasty when Marthaler and her team stopped in to ask for help.

Other Walmart managers in North Carolina were willing to help, as were managers at various Walmarts along the route to the Lakota. But as Marthaler’s team neared the reservation (the closest Walmart is about an hour away), the more unpleasant the stores’ managers grew.

“All the Walmarts [in North Carolina] gave us 10% off for school supplies. We stopped and picked up things along way, like one [store] that had bras on sale for $3, and we cleared the racks of everything they had. But the closer we got to Rapid City and the reservation they were not even willing to do anything. The manager’s whole demeanor about what we were trying to do was very nasty. We had the nonprofit letter and everything, but he absolutely refused.”

She has heard the same from other volunteers. “One gentleman goes out and builds stoves because many [Lakota] don’t have a way to heat their homes. He said went to one of the rental places to get equipment so that he wouldn’t have to haul it from home, but as soon as he told them it was for the reservation, they wouldn’t even rent to him.”

She advised him not to tell them next time.

Marthaler also believes the reservation casino is of little help; indeed, even with the casino, reservation incomes hover around $4,600/year and she feels the casino exploits the reservation more than helps it. There’s also plenty of reason for residents to keep away from the casino and not stray from the reservation: Native American women are the most likely group to become sex-trafficking victims—particularly at the famous Sturgis bike rally, Marthaler said—yet remain the only group of missing persons in the nation for whom records are not kept.

“The movie Wind River, based on a series of true events, is excellent at showing this situation,” she recommends. “With most ethnic groups, there’s misunderstanding or misconception about what someone has really had to endure. You try to get the info out there and promote history in a way that’s accurate or truthful. Like the Holocaust: there are people trying to say it didn’t happen. 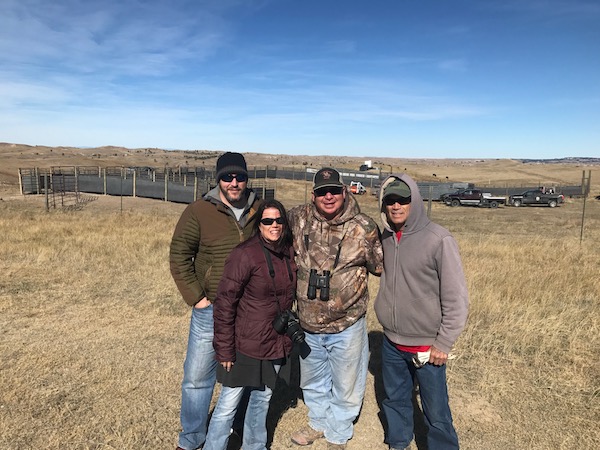 Above: Andy, Tonya, Kenzie, and Bamm Brewer at the tribal buffalo round up. Bamm is managing a program to bring buffalo back to the reservation as a meat source. An organization has built a place to process the meat that meets the culturally appropriate way of utilizing all the buffalo, says Tonya. Below, Tonya with Vigil Two Eagle, a Tribal Council member, at the roundup. 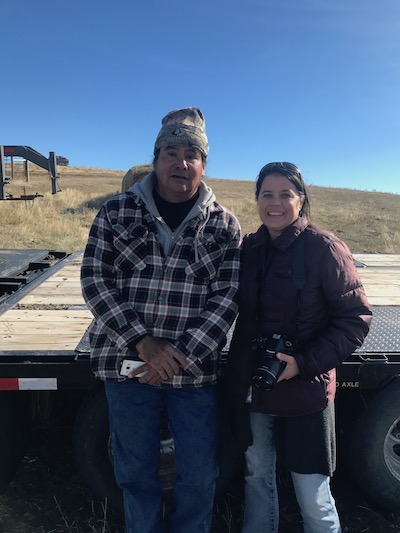 The Unbroken Circle project has completely changed Tonya and Andy Marthaler. “I have always believed in service because of the way I was raised. My dad was an orphan who grew up in an orphanage, and he taught that you always give back. It’s not a big stretch for me or for Andy, whose mom is a chaplain, to live this way. I can’t imagine that there will be a day in my life that I will not try to help in some way.”